Macduff Shipyards Limited have recently delivered their latest new build, ‘CRYSTAL SEA SS 118’, to owner David Steven and his two sons David and Alec. This new build replaces their previous fishing vessel of the same name, which was built by the yard in 2008, and is intended to fish off the southern coast of England targeting a wide range of catch.

‘CRYSAL SEA’ is a new design developed in cooperation between Macduff Shipyards and local design firm Macduff Ship Design.  The hull is a development from previous models with particular attention paid to reducing hull resistance and therefore improving fuel efficiency and running speed. CFD technology was used at the first stage to measure the resistance of the new hull against the previous design and to identify areas where further improvements could be made. Following this the hull was then faired by Macduff Ship Design who then used the virtual model to produce a detailed set of kit construction plans and assess the stability. The kit was then cut in house by Macduff Profilers, a division of the yard, and the vessel was fabricated, engineered and fully fit out in the yards main building hall at Macduff before carrying out sea trials in the Moray Firth.

The hull of CRYSTAL SEA is built completely from steel, apart from the wheelhouse and masts, and features a double chine hull form, transom stern and soft nose bulbous bow which is faired gently into the main hull body. The layout of the CRYSTAL SEA is largely like some of the other recent new builds produced by the yard. Below deck features the cabins, engine room, fish hold and a large freshwater tank forward of the collision bulkhead. Above the deck is situated the aft shelter, galley/mess and side passage area, fish processing area and then a winch room forward where three split winches are sited.

A unique deck machinery package was fabricated by the yard for the CRYSTAL SEA comprising of three split winches, two split net drums, two split sweep winches, two small gear handling winches and a dedicated anchor windlass. The hydraulic system was also designed and installed by the yard. A pull master Gilson winch was supplied by MacGregor Ltd along with the fishing crane and landing crane. Main hydraulic power is provided by a dedicated engine which is a Caterpillar C12 engine rated at 385 hp at 1800 rpm. Secondary hydraulic power is provided by two electric motors each with an output of 45 kw.

The propulsion package is based on a setup which has become quite common in the yards recent new builds and features a Caterpillar C32 main engine rated at 660 hp @ 1800 rpm coupled to a Masson Marine gearbox with a reduction ratio of 9.077:1. This drives a 2500 mm diameter propeller fitted within a nozzle, both of which were supplied by Wartsila. The remaining stern gear elements were designed and manufactured by Macduff Engineering, a division of the yard, on CNC operated machines. This is the fifth propulsion system of this design to be fitted by the yard and has been noted to perform very well, operating smoothly and quietly and taking advantage of the C32 engines flexibility which can help to extract full power whilst both steaming and trawling.

Two Beta Marine generators are fitted that are based on a Cummins 6BT5.9D2(M) engine with Mecc Alte alternators and each output a total of 81.6 kW of electrical power. The electrical system on board was designed and installed by R D Downie of Fraserburgh who installed the system to their usual high standard and built the switchboards in house. 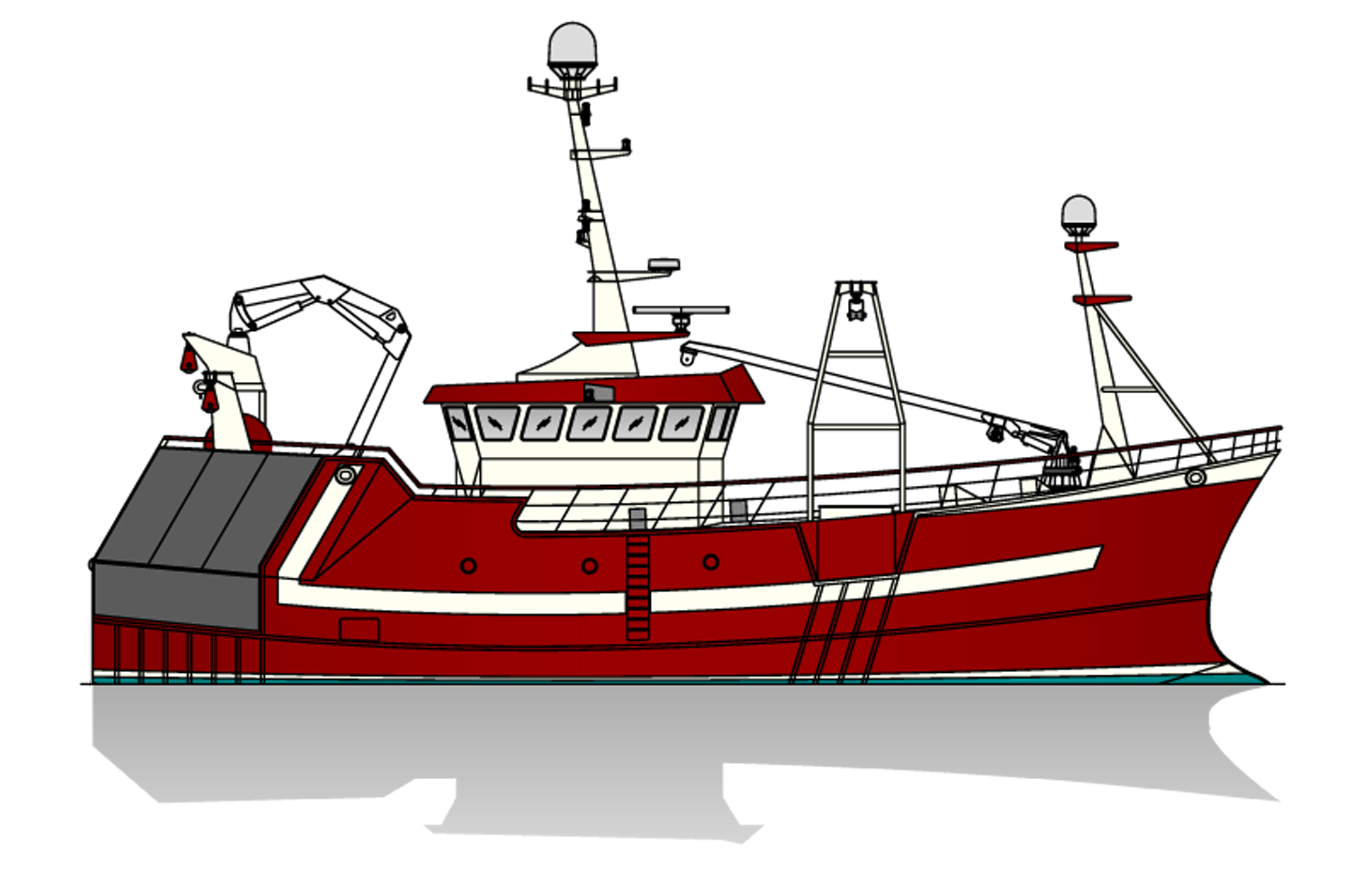 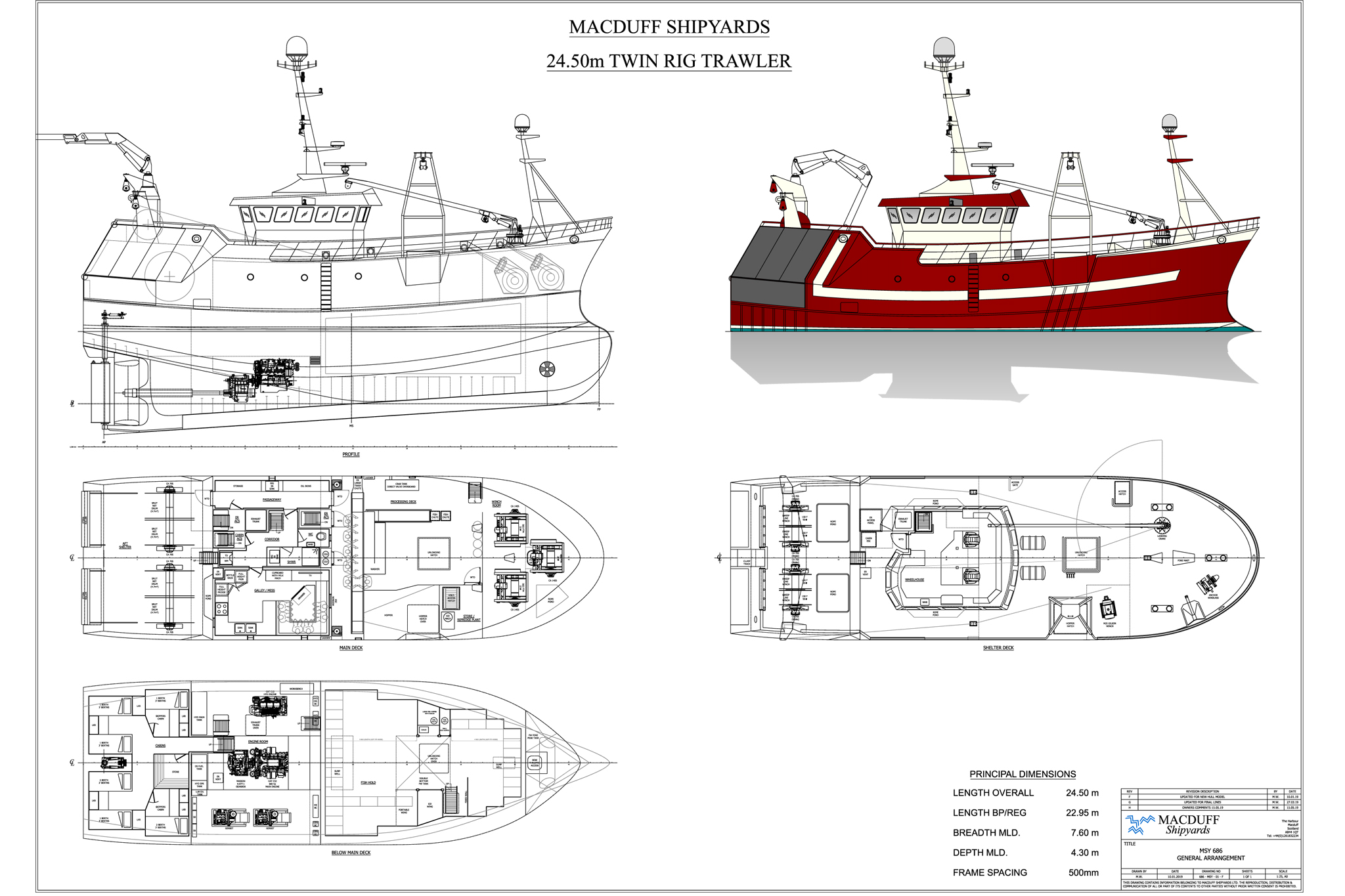