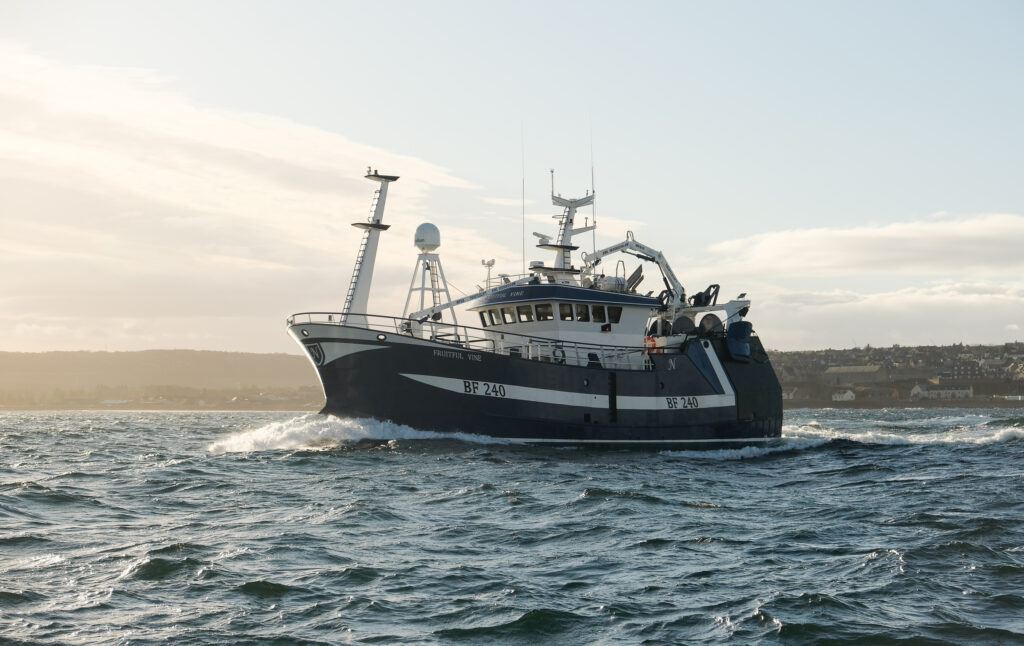 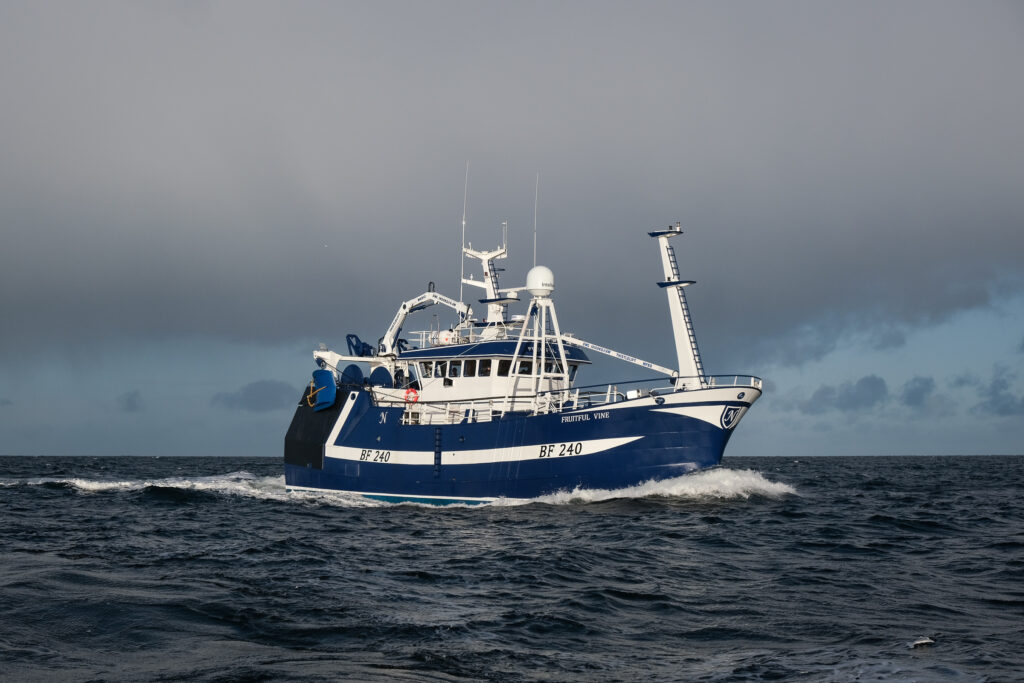 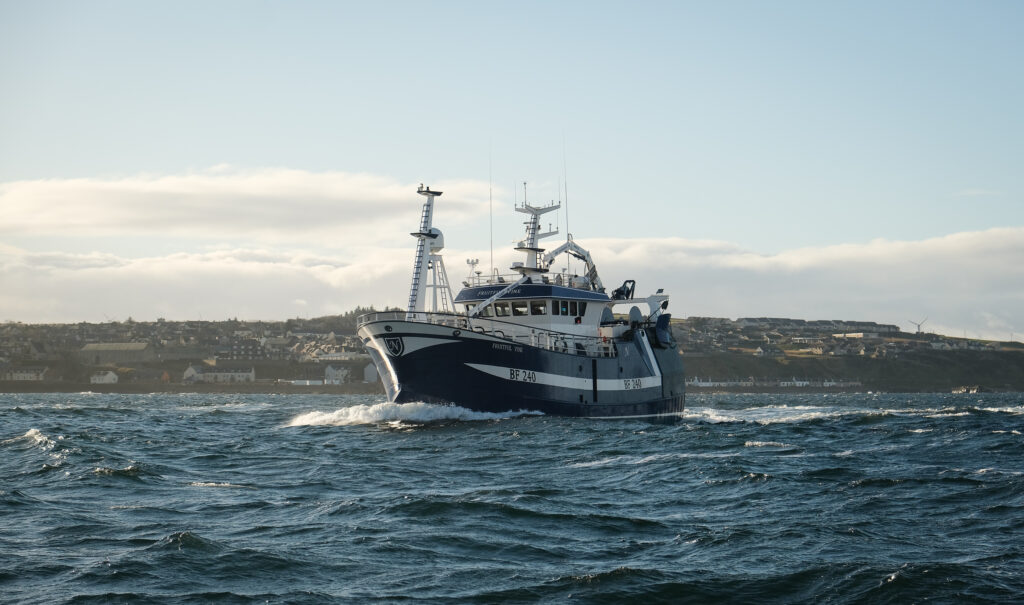 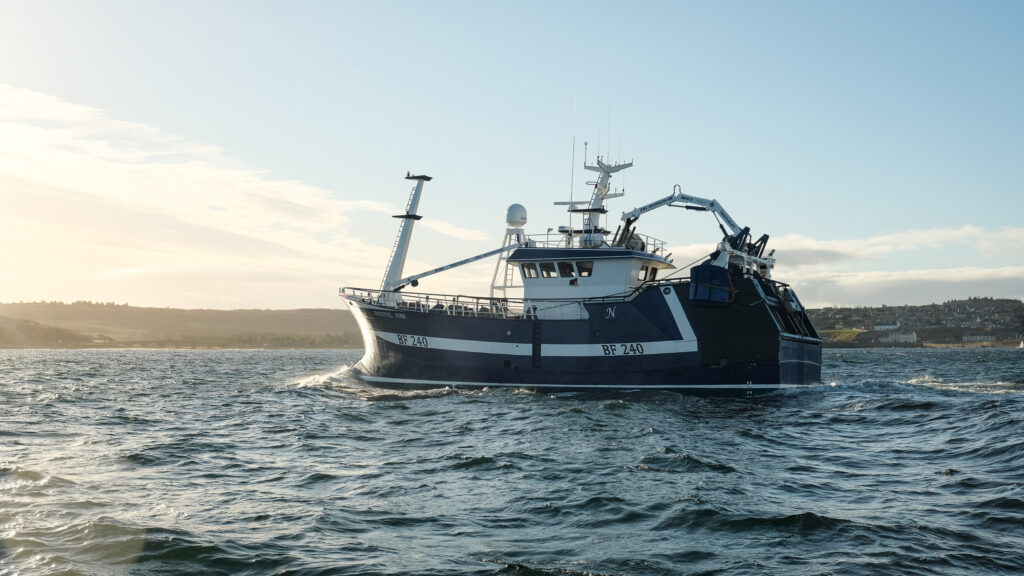 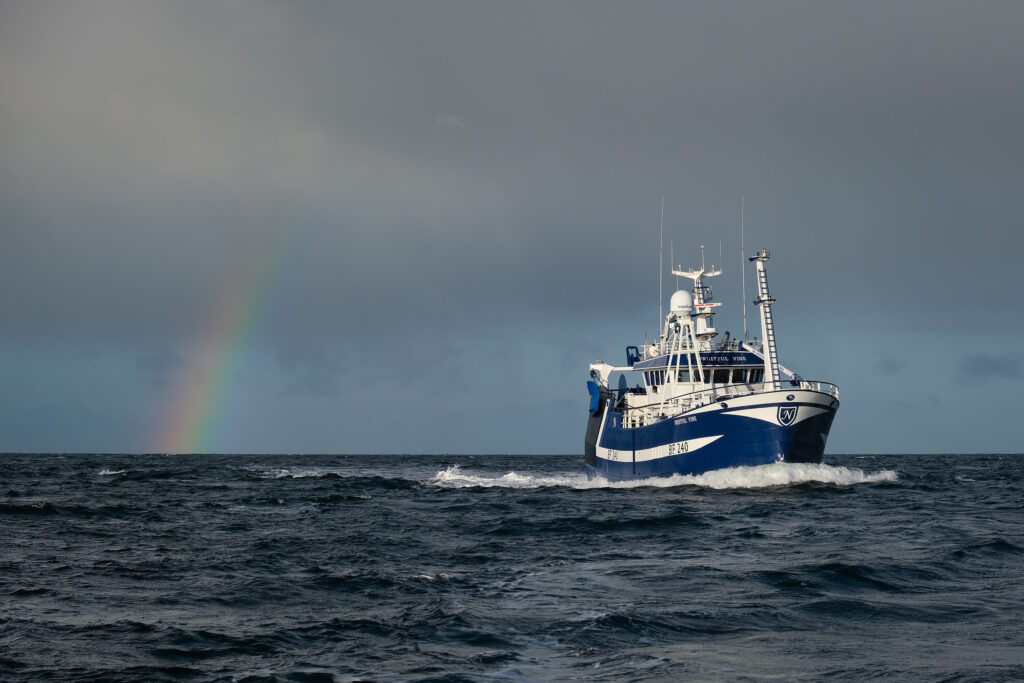 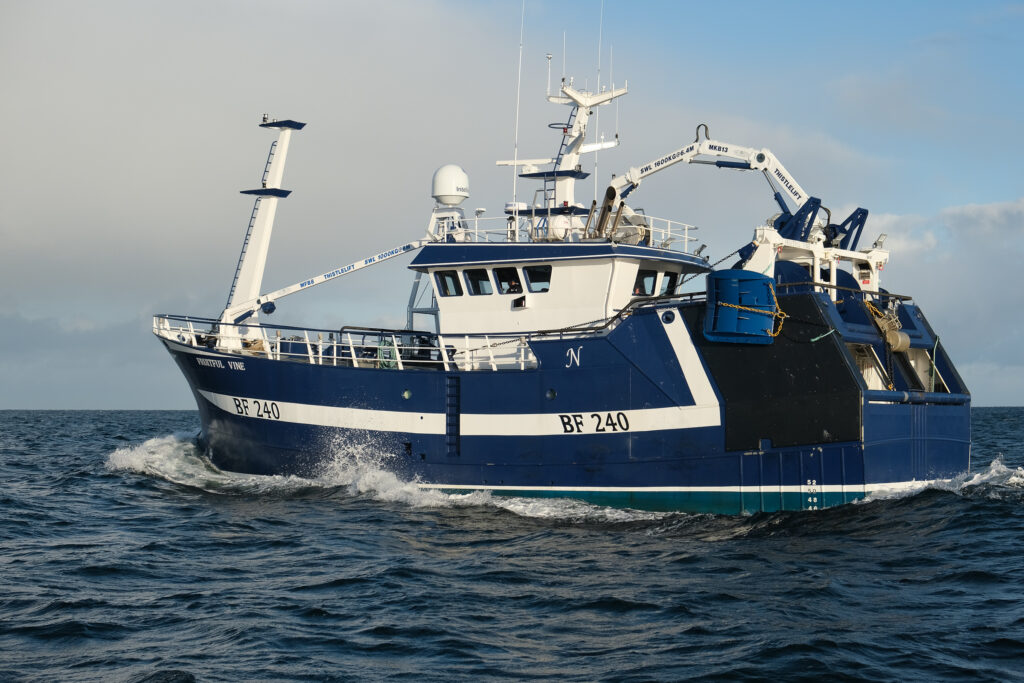 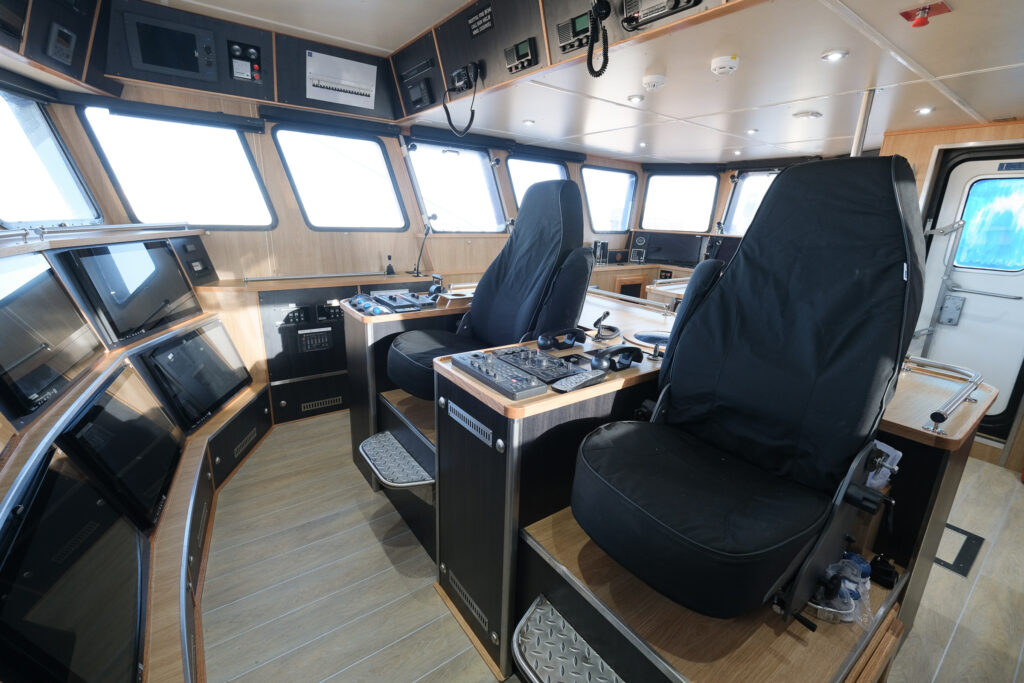 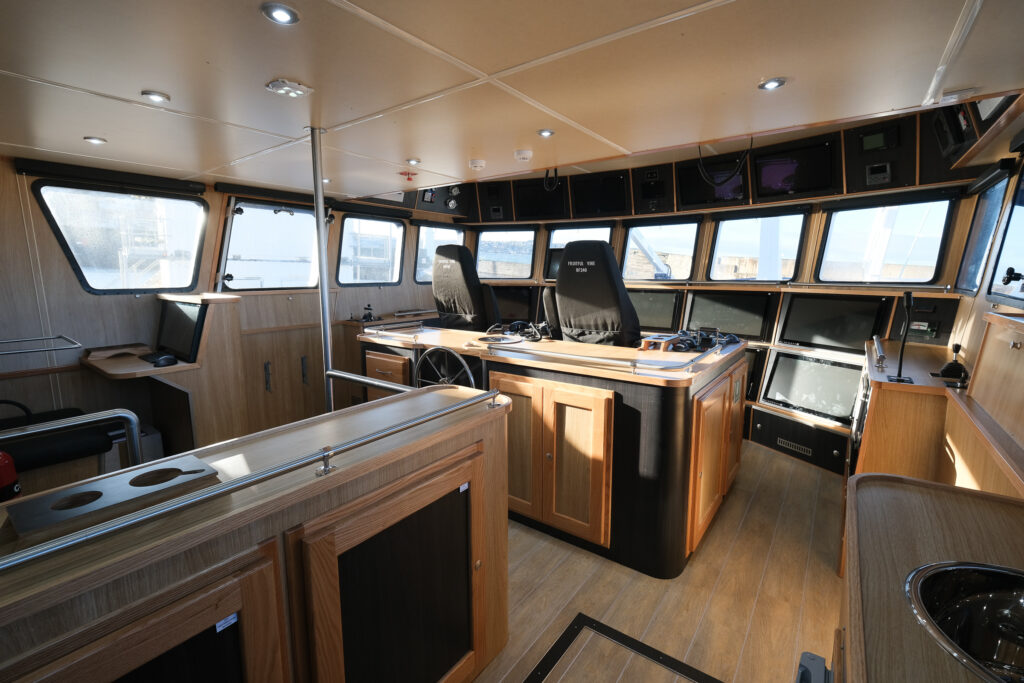 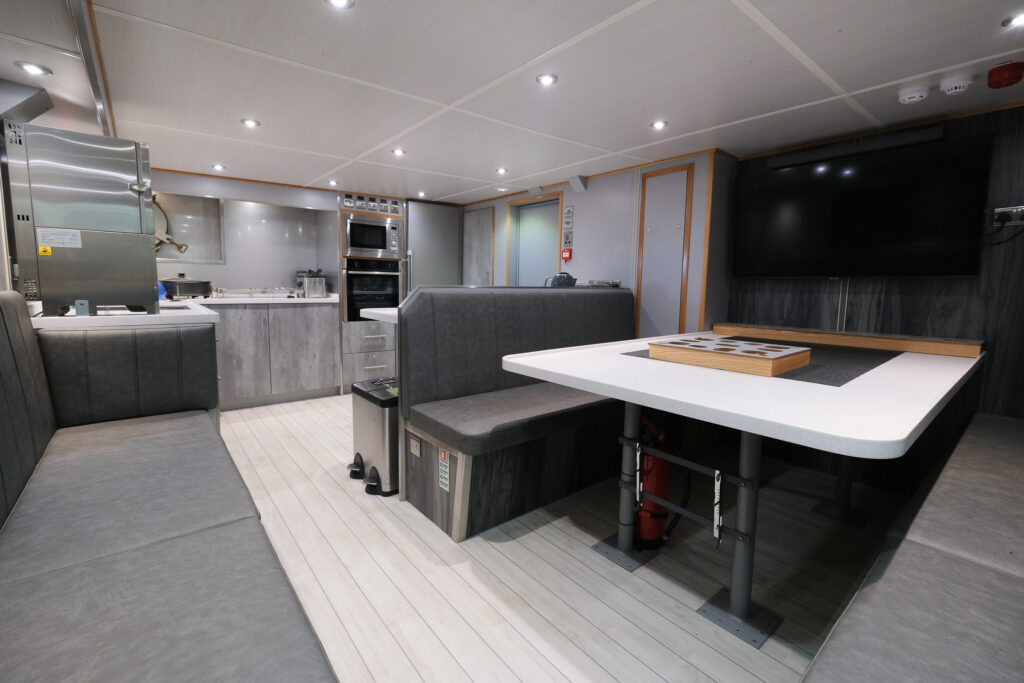 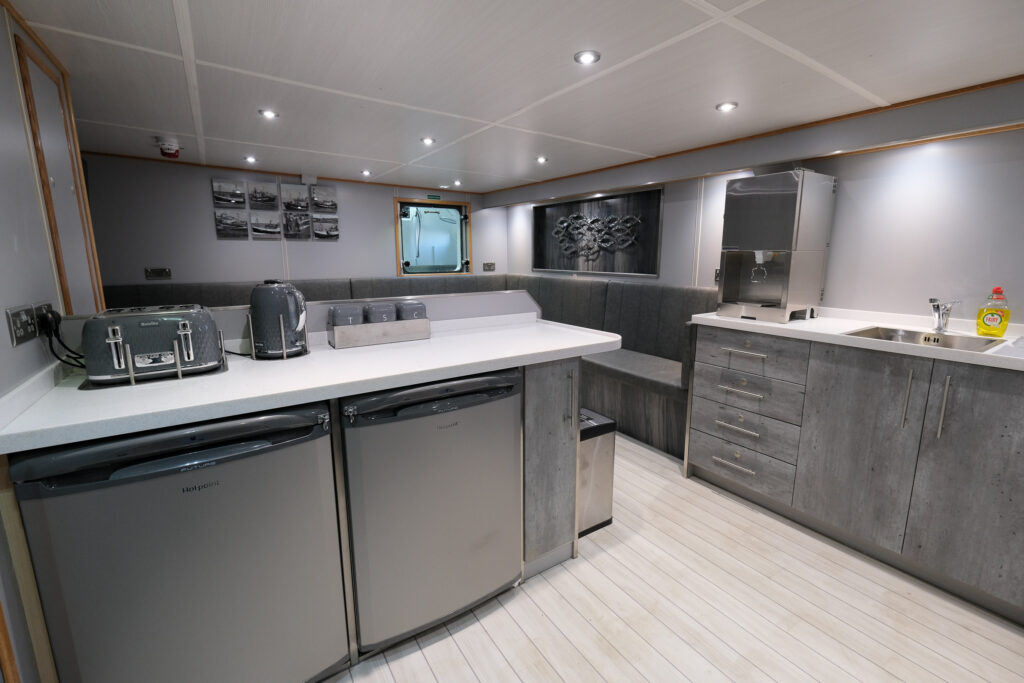 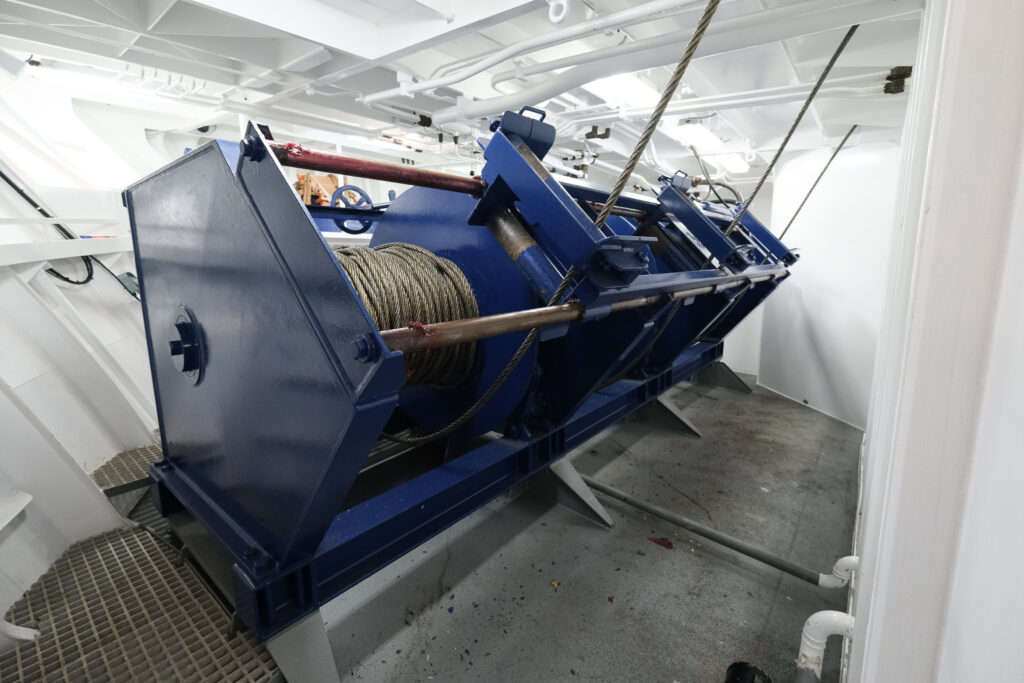 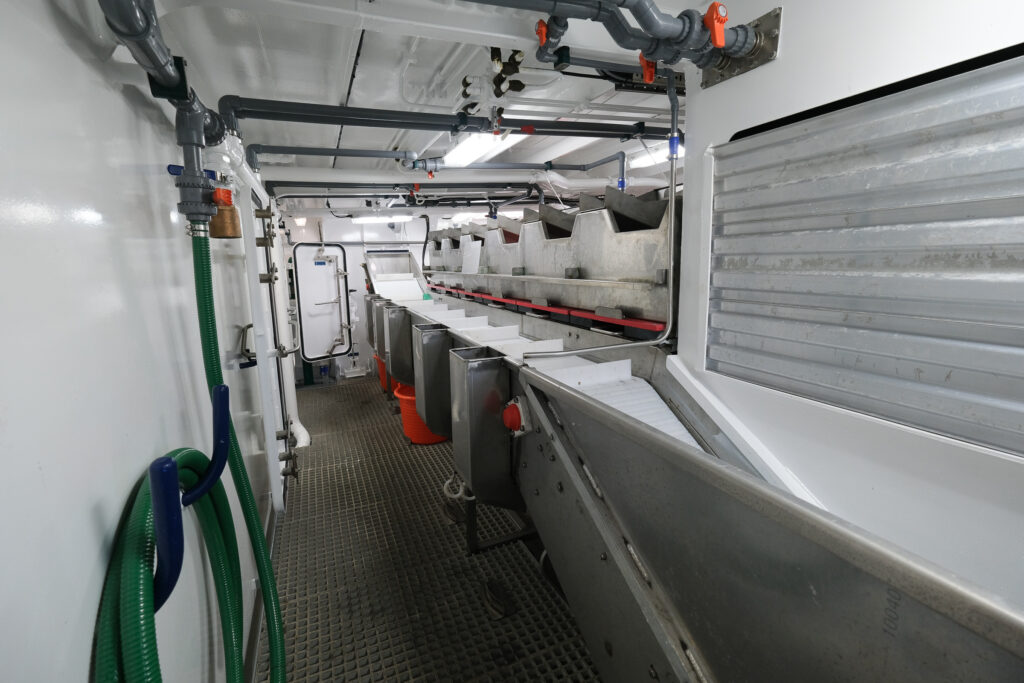 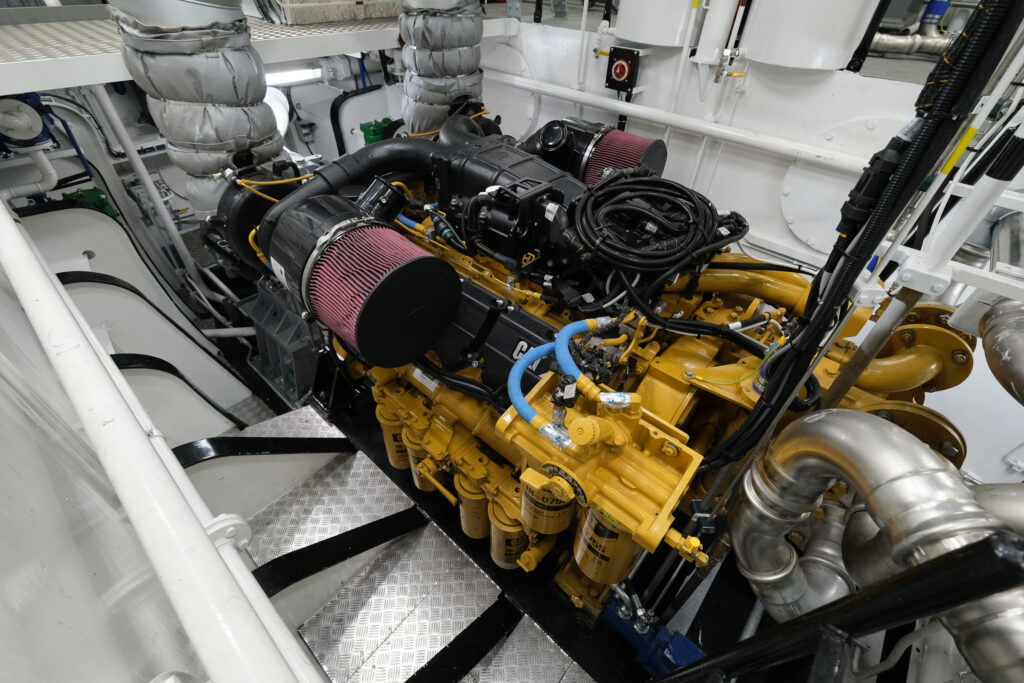 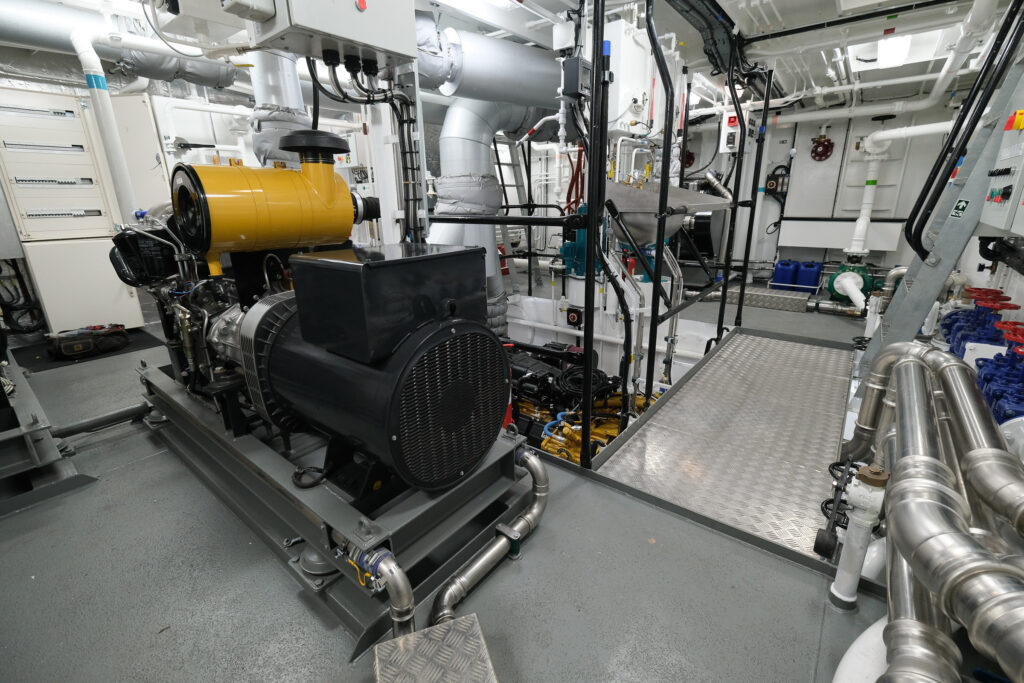 Macduff Ship Design are pleased to announce the delivery of the new Macduff Shipyard built fishing vessel, ‘FRUITFUL VINE, BF 240’, to the owner’s Nicol Fishing Ltd. This new build replaces their previous fishing vessel of the same name, which was built by the yard in 2010 and is intended to fish around the coast of Scotland, occasionally pair trawling alongside the families other fishing vessel, the ‘STEADFAST HOPE BF 340’.

FRUITFUL VINE is a sister ship to the ORION and was originally planned to be built from the yards previous 24.5 m hull model but during the early design phase, a decision was taken to remodel these vessels bows based on the preliminary results from a tank testing program which the yard and Macduff Ship Design were running for another project. A quick study was conducted by the Wolfson Unit in Southampton using CFD technology to compare the proposed new bow against the previous model with the results showing a net decrease in hull resistance at steaming speeds, as anticipated. Following this, the hull form was faired and finalised by Macduff Ship Design who then produced a full set of steel construction plans along with conducting the incline experiment and producing the vessels stability booklet. The fabrication of the hull was carried out in Macduff with the construction reviewed and verified by SFIA and the MCA.

The hull of FRUITFUL VINE is built completely from steel, apart from the wheelhouse and masts, and features a double chine hull form, transom stern and modern bow designed to cut cleanly through the sea with less energy leading to a reduction in fuel consumption and emissions along with increased crew comfort. In broad terms, the layout of the FRUITFUL VINE is similar to some of the other recent new builds produced by the yard. Below deck features the cabins, engine room, fish hold and a large
freshwater tank forward of the collision bulkhead. Whereas above deck is situated the aft shelter, galley/mess and side passage area, fish processing area and then forepeak where the trawl winch is situated.

A bespoke hydraulic deck machinery package was fabricated by the yard comprising of a triple barrel winch with increased drum size to accommodate pair fishing gear, two split net drums, two bagging winches, two small gear handling winches, cod-end lifting winch and a dedicated anchor windlass. Thistle Marine of Peterhead supplied both the MFB8 landing crane and MBK13 power block crane, both of which featuring a slew ring base. Primary hydraulic power is provided by a single Parker hydraulic pump driven from a dedicated Mitsubishi 6D24 auxiliary engine producing 218 kW whilst secondary hydraulic power is provided by a Parker hydraulic pump driven from a power take-off fitted to the main propulsion’s gearbox. A hydraulically powered bow thruster with 2.3
tonnes of thrust is also fitted, supplied by Kort Propulsion. The hydraulic system, designed by the yard, is cooled via a Blokland box cooler and Bowman heat exchanger.

The propulsion package features a 2.5 m fixed pitch propeller supplied by Wartsila, driven by a CATERPILLAR C32 main engine with 660 hp @ 1600-1800 rpm through a Masson Marine W7400 reversible gearbox with a 9.077:1 reduction. FRUITFUL VINE is the eighth vessel built by the yard in recent years to feature this propulsion package which has demonstrated itself to be both robust and adaptable with the Wide Operating Speed Range of the C32 main engine providing flexibility to achieve full power from a fixed pitch propeller both whilst steaming and trawling. FRUITFUL VINE also features a triple rudder system and a high lift propeller nozzle provided by Wartsila.

Cooling systems for all engines and hydraulics onboard are served by box coolers supplied by Blokland Non-Ferro. The electrical power onboard is provided by two Mitsubishi generator sets supplied by Macduff Diesels Limited, each with a rating of 98 kWe and sufficient size to run the vessel’s power independently providing complete redundancy.

The electrical systems onboard were designed and fitted by R.D. Downie, who also fabricated the vessel’s switchboard and control panels for all the pumps and motor starters. In addition to this, R.D. Downie also provided the fire, bilge and gas alarm systems on board along with the navigation light panel and assisted with the installation of the navigation equipment.

The fish processing deck features a catch handling system built by the yard and is complemented by a DEGA resin floor system fitted by A. Paterson Marine services. Two separate compartments are formed within the fish processing area which house both a storeroom and ice plant room. The fish hold refrigeration system along with the ice machine was supplied and fitted by Premier Refrigeration.

A high specification navigation package has been supplied and fitted onboard by McMinn Marine Ltd, please contact David McMinn for full details. 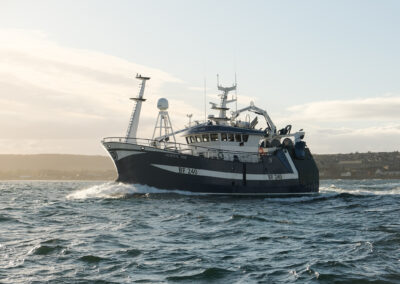 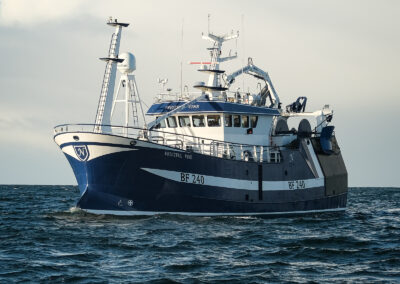 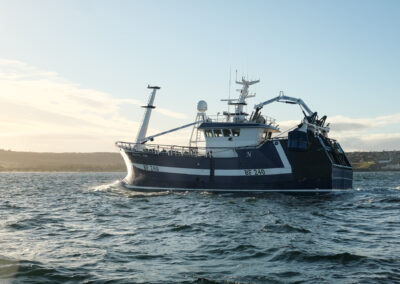 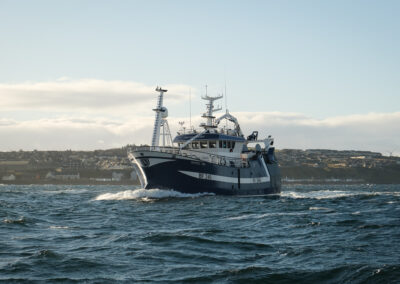 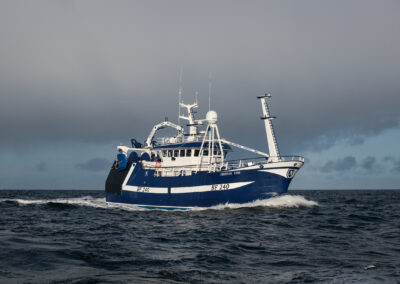 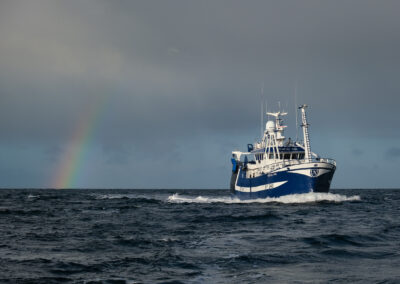 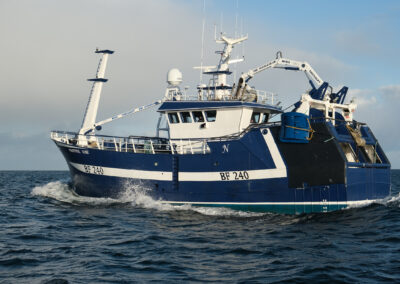 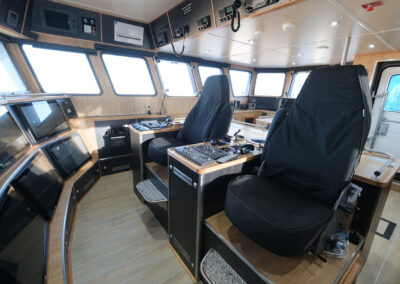 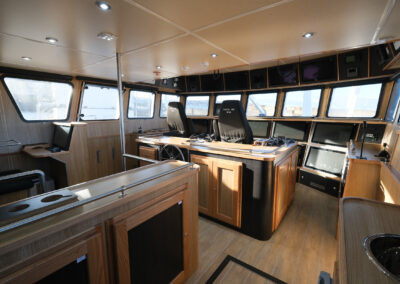 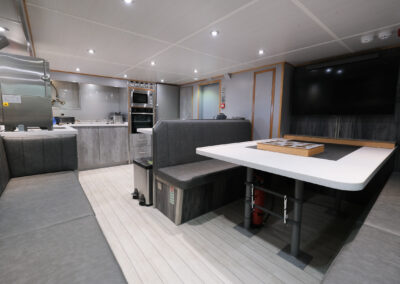 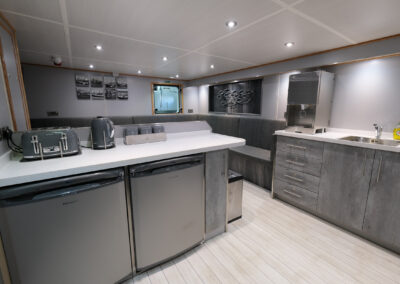 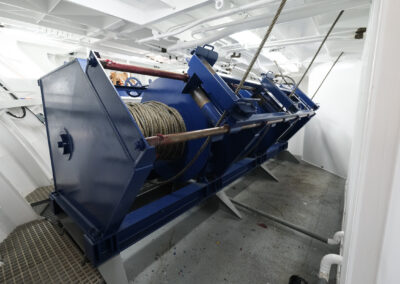 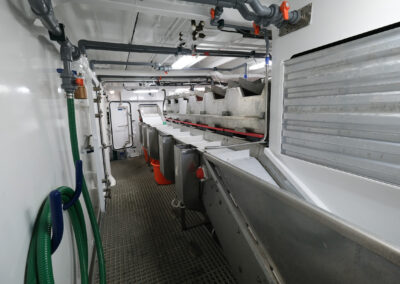 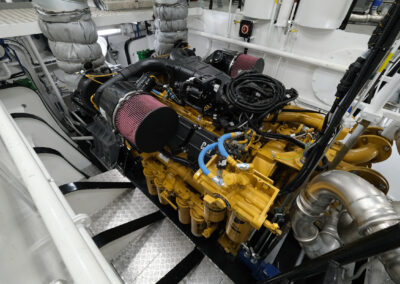 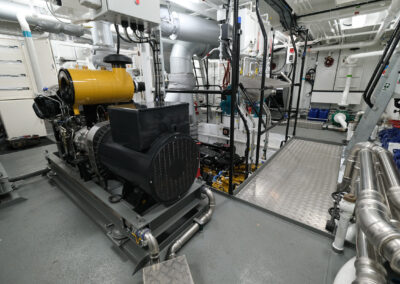