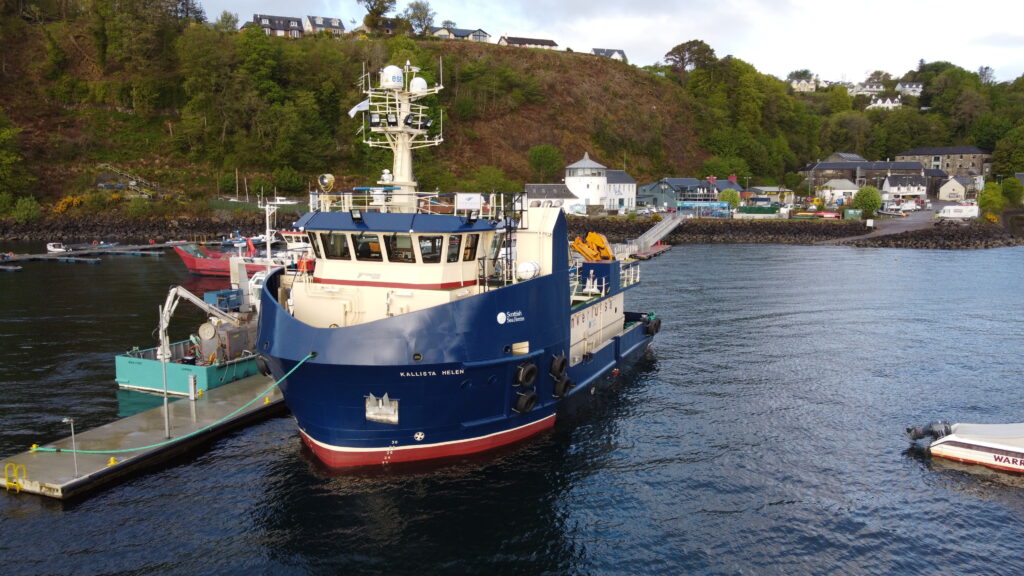 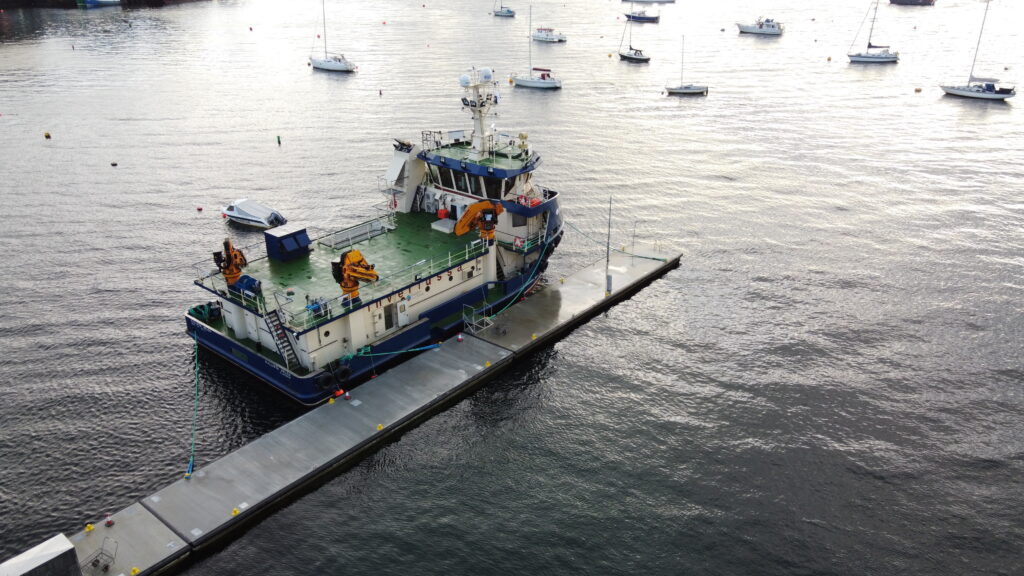 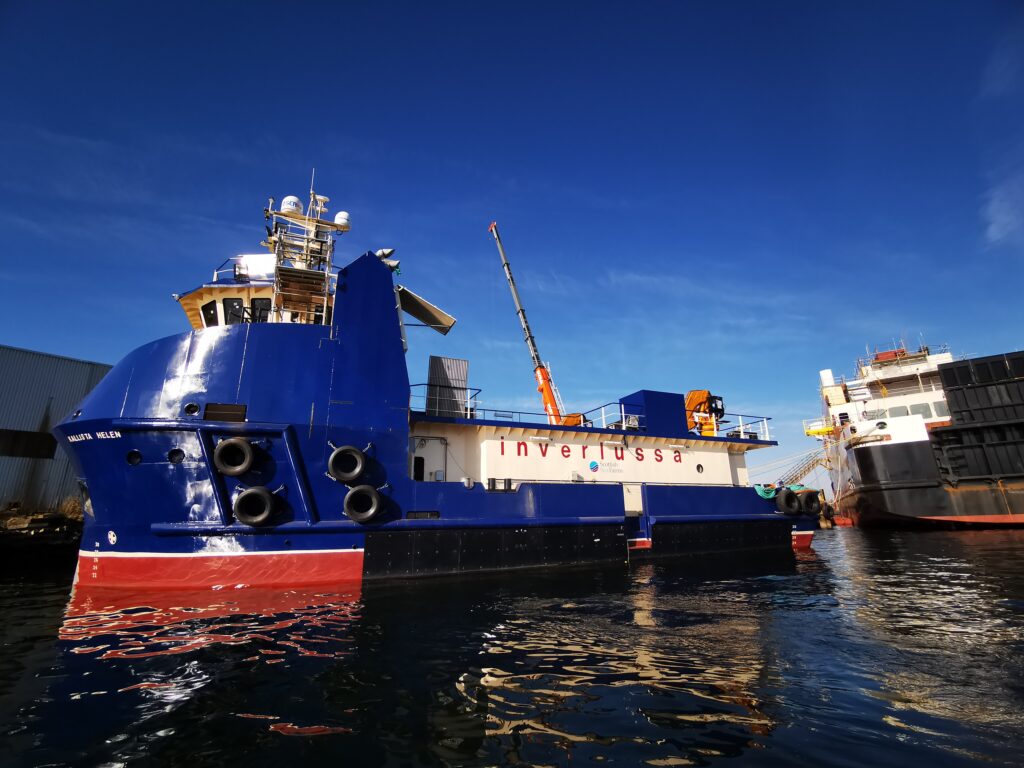 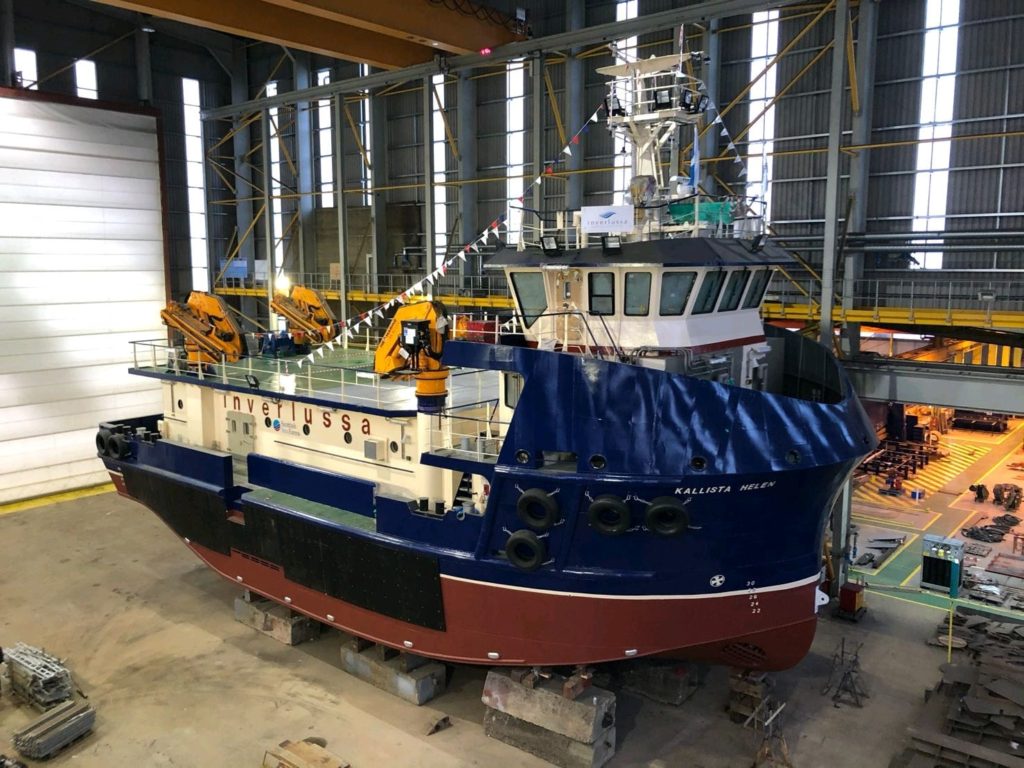 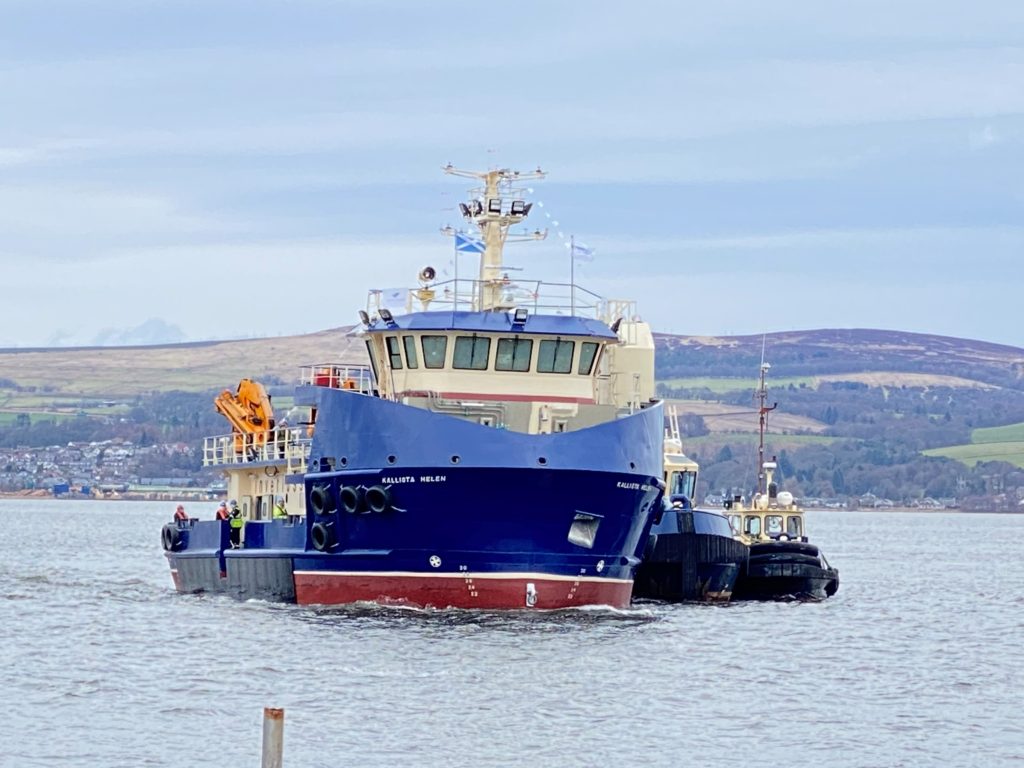 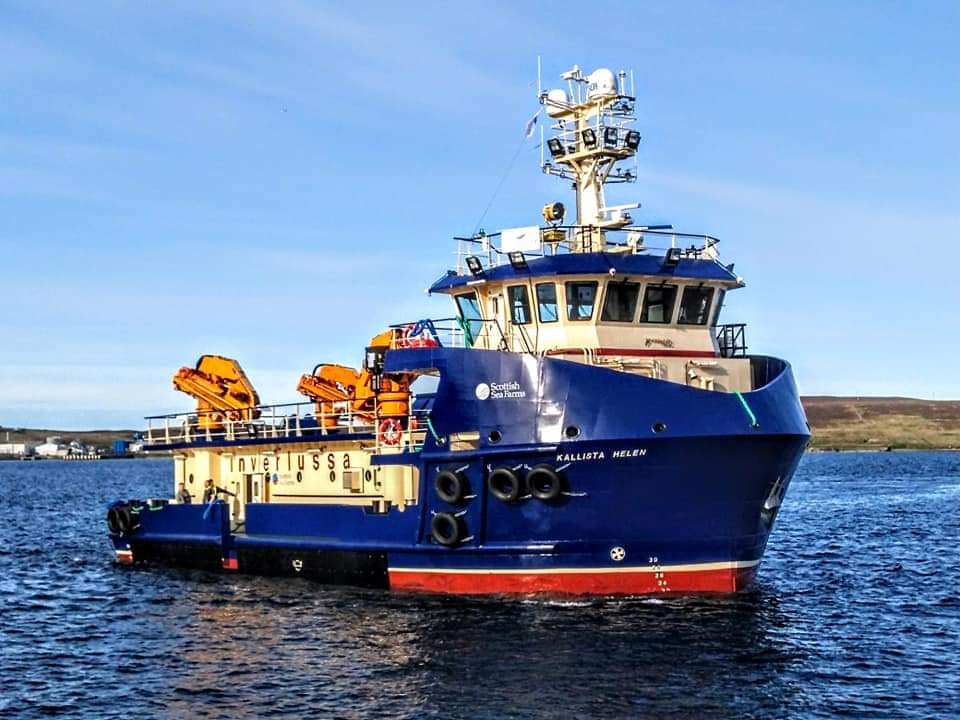 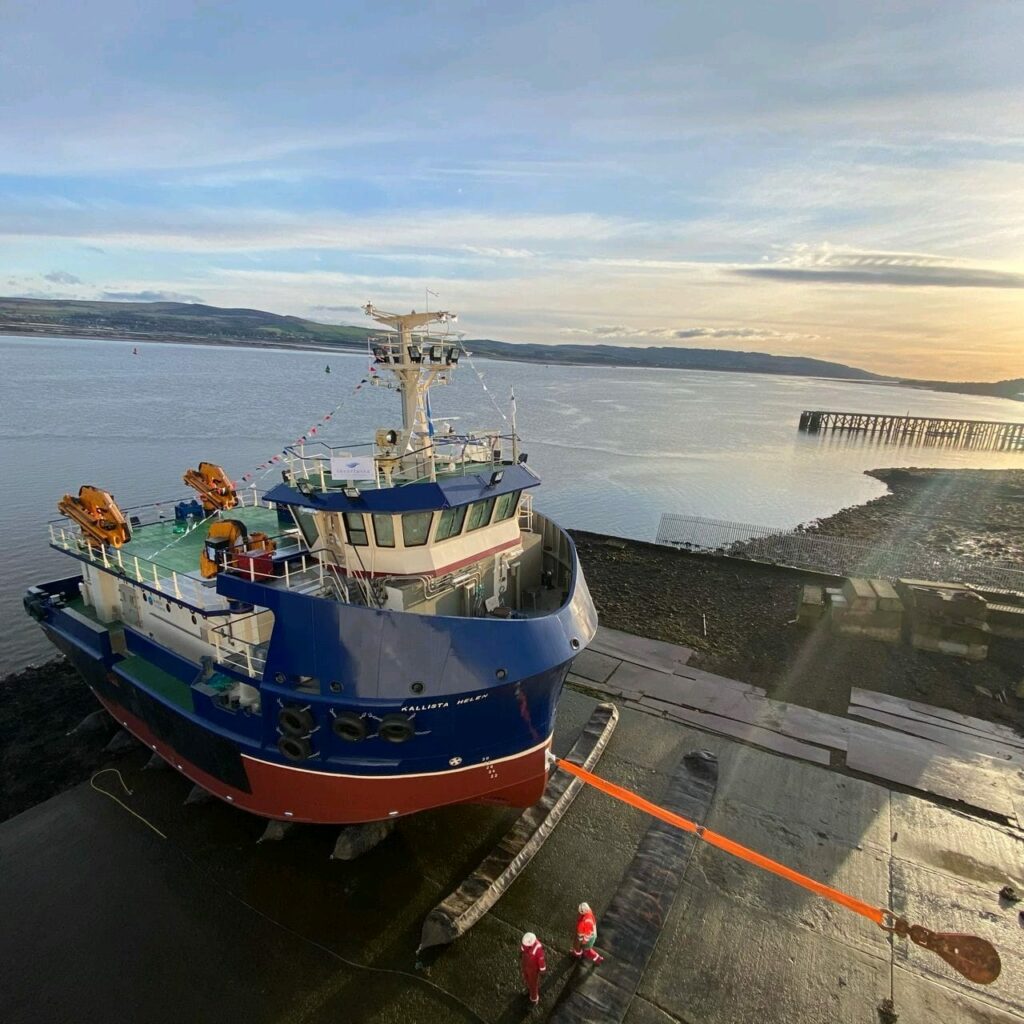 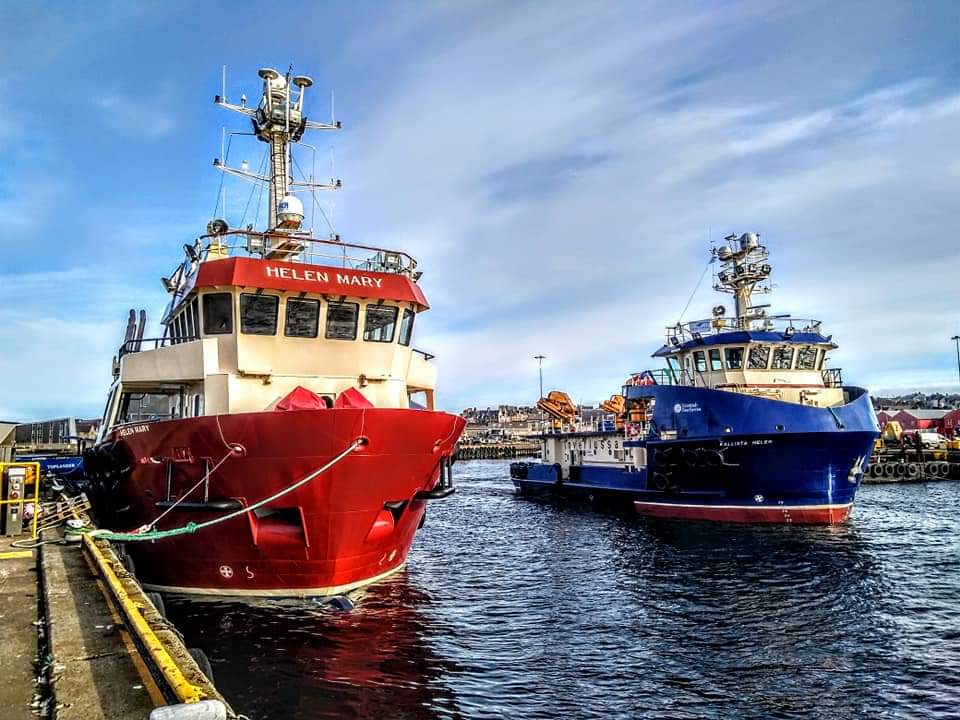 Macduff Ship Design are pleased to announce the delivery of the Aquaculture, Thermolicing Vessel MV ‘KALLISTA HELEN’. The first of its type to be designed and built-in Scotland. The vessel, completed by Fergusons Marine Engineering, is the fifth to enter service for Inverlussa that has been built to plans from Macduff Ship Design, compounding a long working relationship culminating in the most innovative design delivered to Inverlussa yet.

The project began in the summer of 2018 when the owner expressed an interest to build a new state of the art de-licing vessel with fish health and welfare front of mind. Scottish Sea Farms, who the vessel will be on contract with, were looking to minimise fish handling and maximise fish welfare and it was these key requirements that the vessel was built around.  Events outside of everyone’s control have caused delays to the project however she has now been delivered to the owners and is completing final outfitting and commissioning of the Thermolicer equipment in Shetland.

Central to the vessels principles is a Thermolicer designed and engineered by ScaleAQ and the first of its kind to be constructed in Scotland. A sudden rise in water temperature is a well-known method of killing lice so the Thermolicer has been developed to bathe the fish in temperate water for a short period. This will cause the lice to die and fall off the fish, after which they are separated from the water using a 500 – micron filtration system and collected to be removed from the marine environment. Wider pipes with an overall straighter and simpler layout have been utilised to create a gentler experience for the fish. This method allows for de-licing up to 120 tonnes per hour of fish.  The system allows for high levels of fish welfare and, as the process only utilise seawater, at the same time avoids pumping any chemicals into the sea. The system is at the heart of fish welfare which is what the boat has been built around. To protect this asset, it has been enclosed in a dedicated shelter deck to shield it from the elements. In turn, this provides a safer working environment for the crew as well as better operational efficiency and improved seaworthiness. Additionally, it provides a large area on the top deck for cargo and equipment, namely 3 H.S. Marine AK 40 cranes. The 40 ton/m cranes have a max outreach of 15.1m and can all work simultaneously without any restrictions. This capability allows the vessel to operate the entire system including all intakes and return systems and the vessel will be less dependent on other workboats while on site. Incorporation of cargo space and container latching points in the top deck allows for the haulage of ISO tanks should it be required.

The systems and machinery onboard have a high peak electrical load, resulting in a large engine room that spans over half the length of the hull.  Propulsion is derived from 2 x Cat C32 main engines delivering a total power of 1300hp, the engines are paired with two ZF W1800 reverse reduction gearboxes.  The shafts are connected to twin fixed pitched 1500mm propellors which are combined with low drag nozzles, supplied by Kort propulsion, to improve free running speed whilst maintaining a bollard pull of 15 tonnes.  The vessel is also fitted with high lift rudders by Wills Ridley and a 250 Kw hydraulic bow thruster by Kort Propulsion which ensures the excellent manoeuvrability required when working in and around the salmon farm. Two Cat C32 generators are also installed, providing 860kW each. These generators are used to power the thermolicing equipment, including the heating elements used to warm and maintain the temperature in the 22,000 Litres of seawater contained in the fish treatment system. They also provide power for the fish pumps and a 130 m3/h pump which is used to fill the system. The pumps used to bring the fish on board to begin the treatment are large vacuum pumps as these are relatively gentle on the fish and offer high fish welfare. To properly delouse the fish the system’s water is required to be at 28⁰C to 34⁰C depending on seawater temperatures however, there is a heat recovery system in place to draw heat from the engines and transfer it to the delousing system, saving on both fuel usage and carbon emissions. Smaller Cat C4.4 auxiliary engines are also used to power ships systems when the main generators are not in use.

Forward of the engine room below deck sits 4 cabins with bathroom facilities. Careful consideration was made in respect to the accommodation area to ensure maximum crew comfort and insulation from engine room noise and vibration. Each cabin is equipped with heating, flatscreen T.V.’s, working desk, washbasin with mirror light and shaving socket as well as usual amenities to be expected. Above these cabins, on the main deck, a well-appointed galley/mess/lounge sits alongside the large dry locker. The dry locker incorporates engine room access, a shower room, access below to the cabins and access up towards the wheelhouse. Accommodation on the fo’c’sle deck is comprised of two single man cabins with a bathroom, an A/C and electronics space as well as a dedicated control room for the thermolicing equipment. Moving up to the large wheelhouse which gives a commanding 360-degree view with particular emphasis over the aft deck area thanks to the floor to ceiling windows. From here, aft control positions have been arranged port and starboard to allow for greater flexibility. There is also additional crew seating, a ships office area and a client office workspace within the wheelhouse.

We are thrilled to have been part of this project which showcases Scottish maritime strength with local businesses supporting each other, from initial design and conception through to the final deployment. Following completion of the vessel in Glasgow in May the ‘Kallista Helen’ departed for Shetland for final outfitting with a short stop at her homeport of Tobermory. Following the installation of the thermolicing equipment, she will go on a long term charter to Scottish Sea Farms. 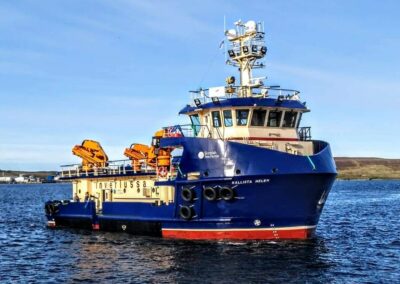 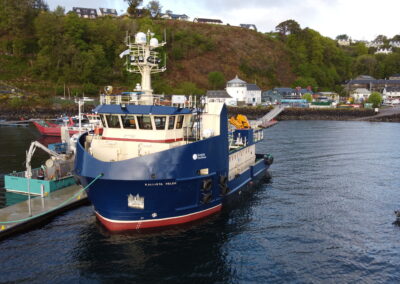 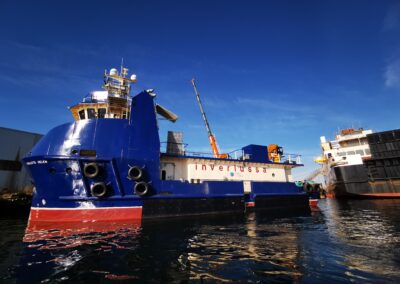 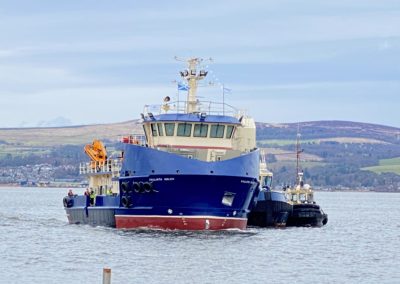 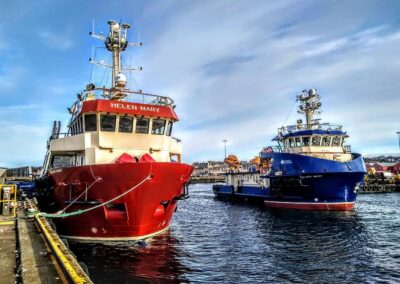 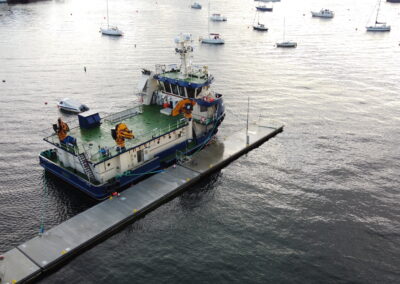 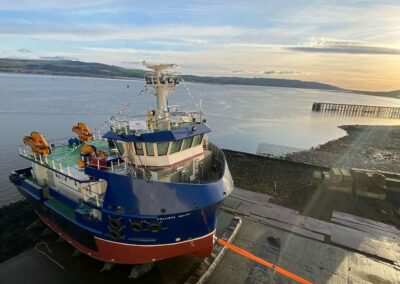