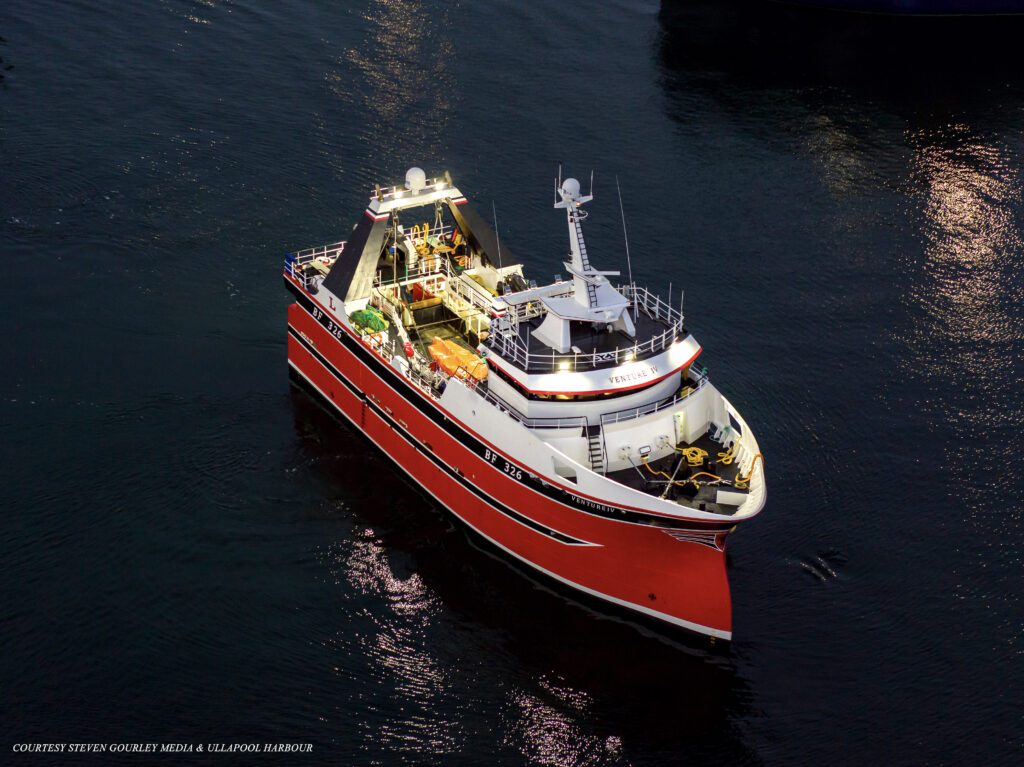 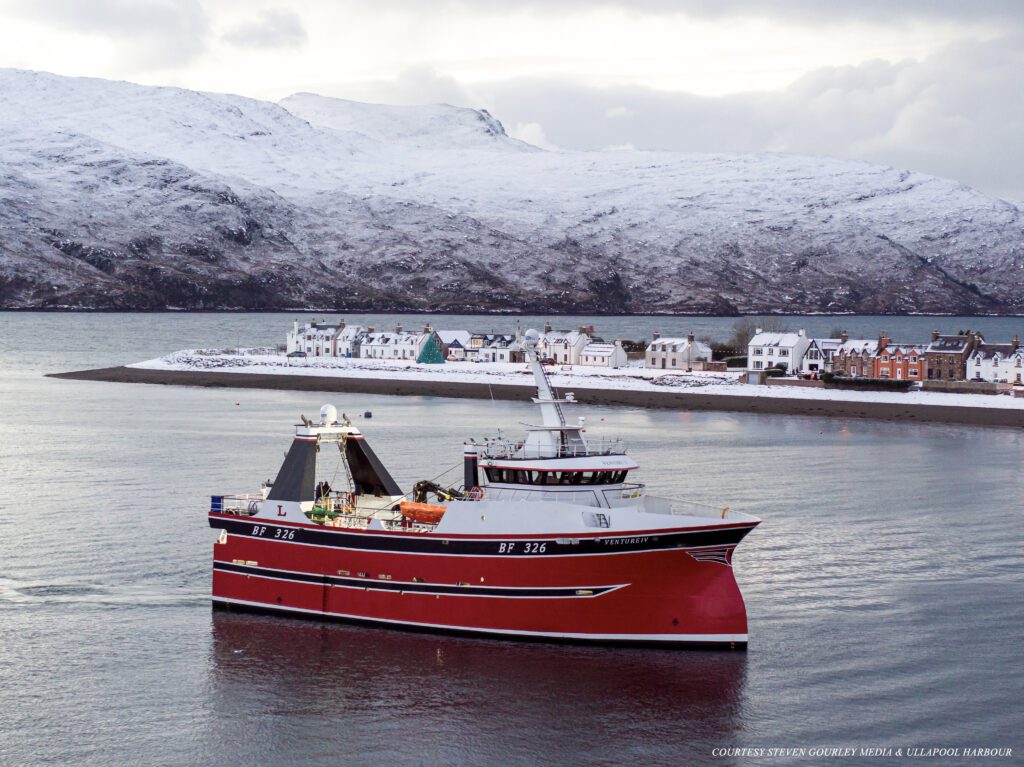 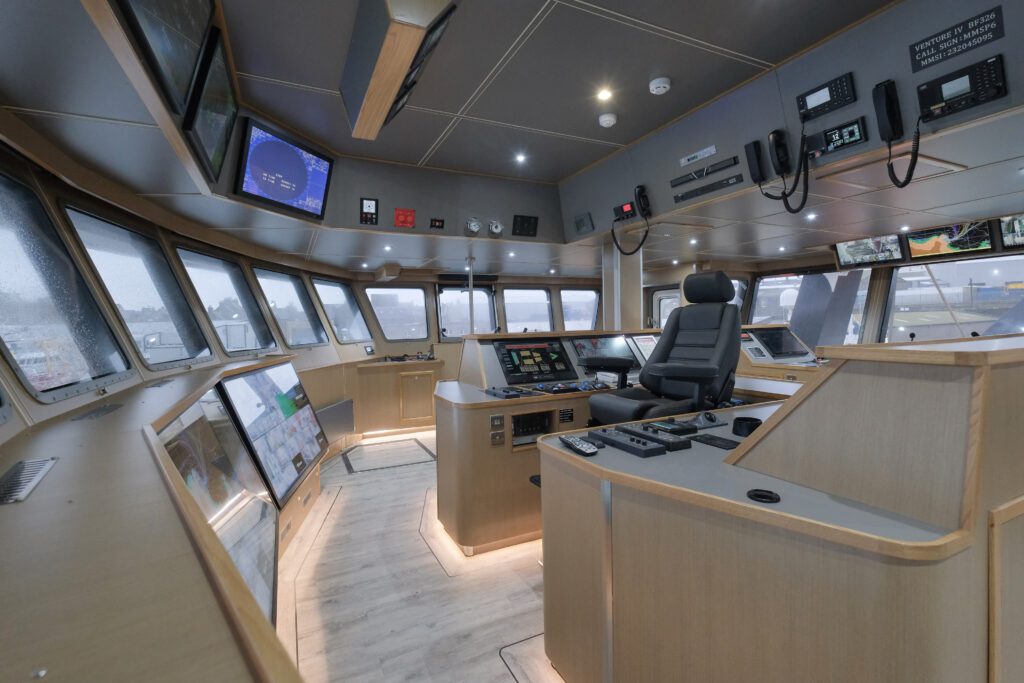 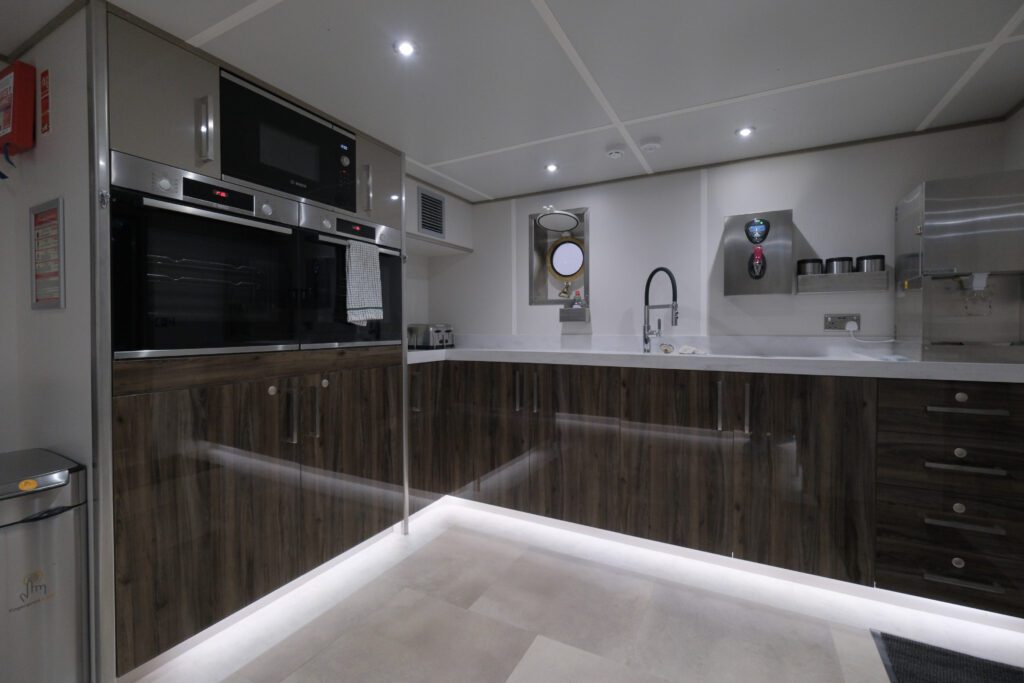 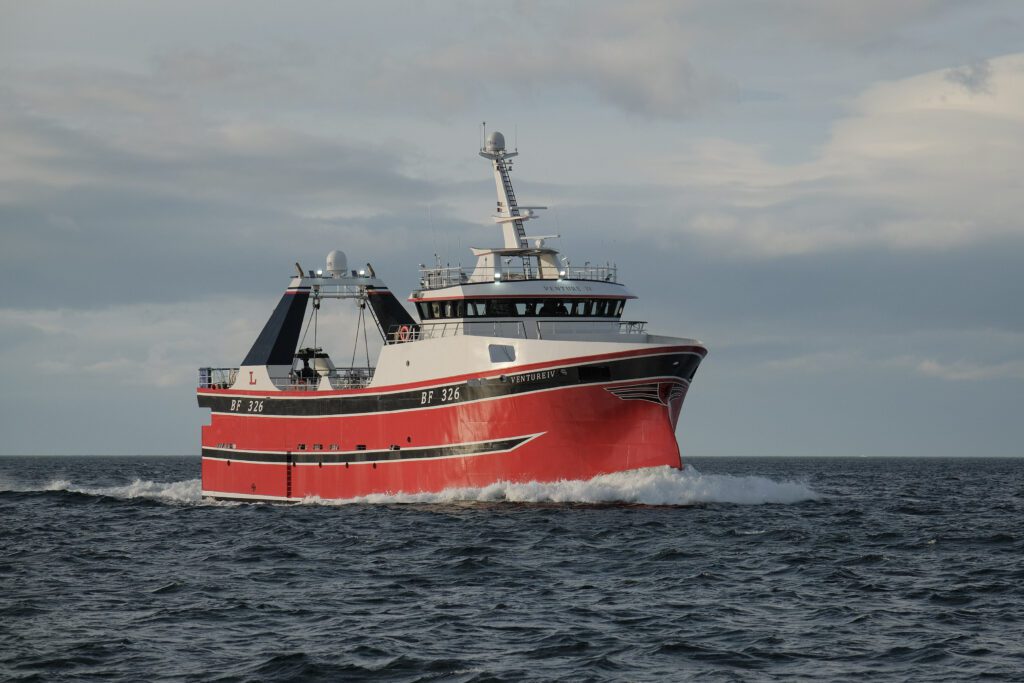 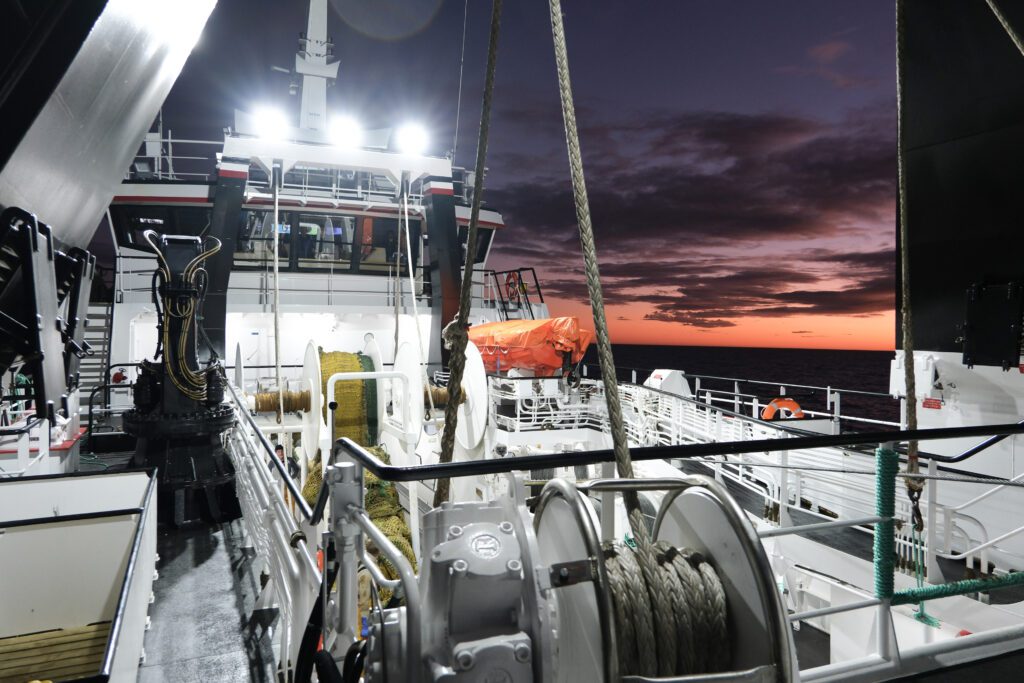 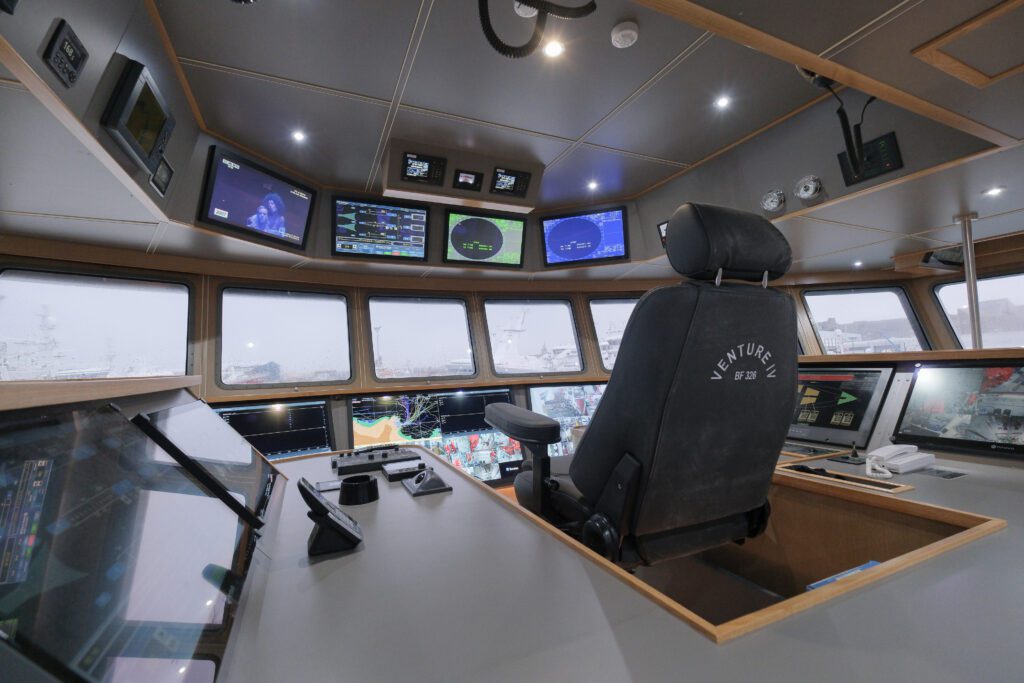 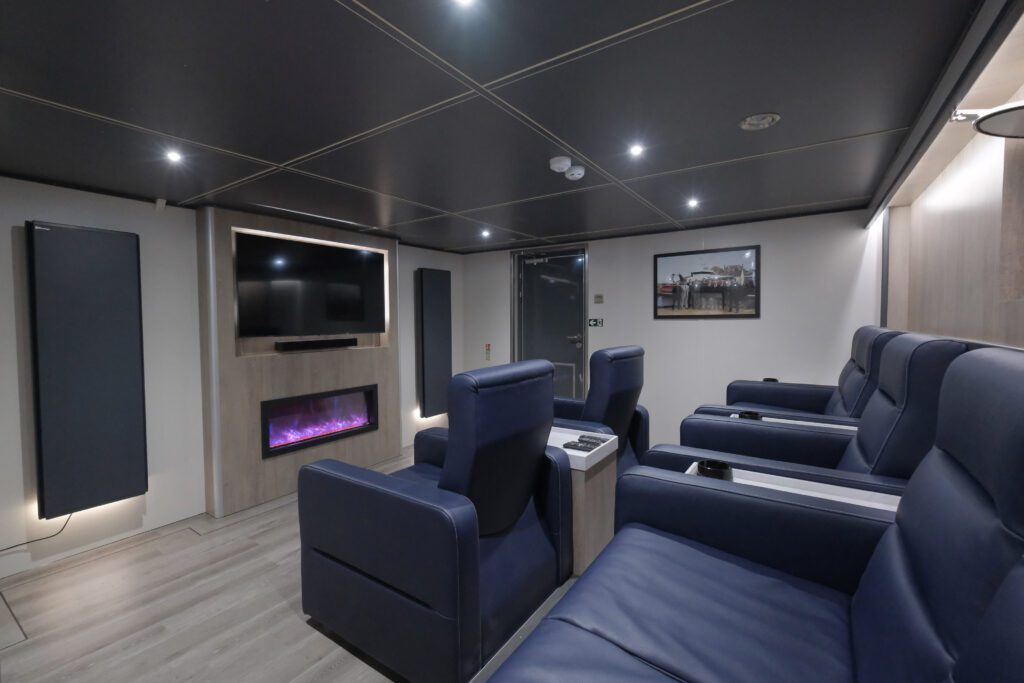 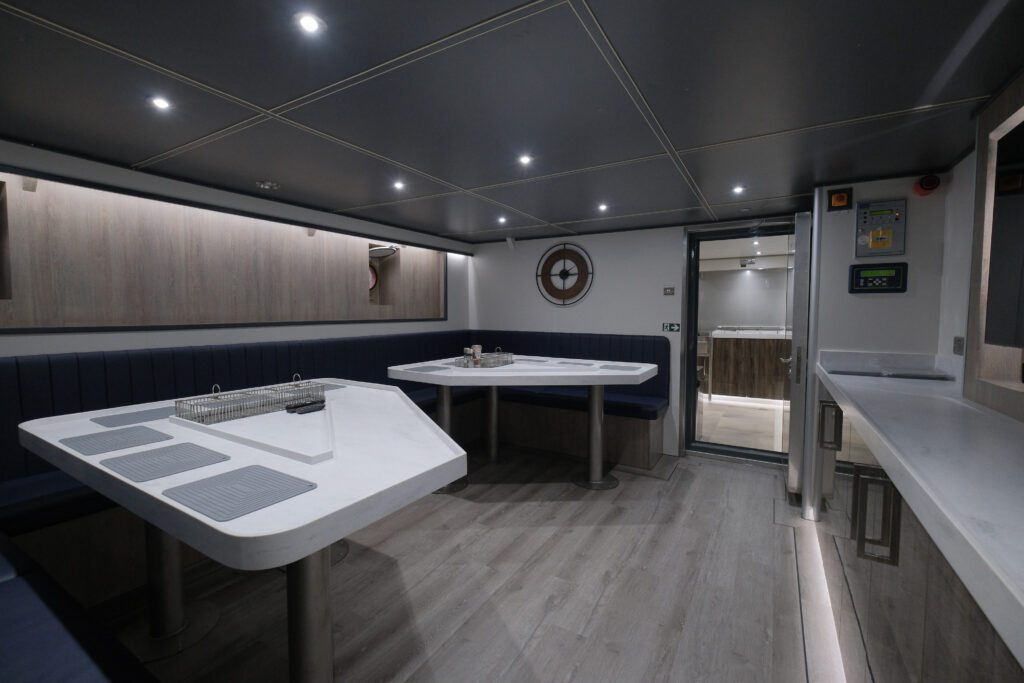 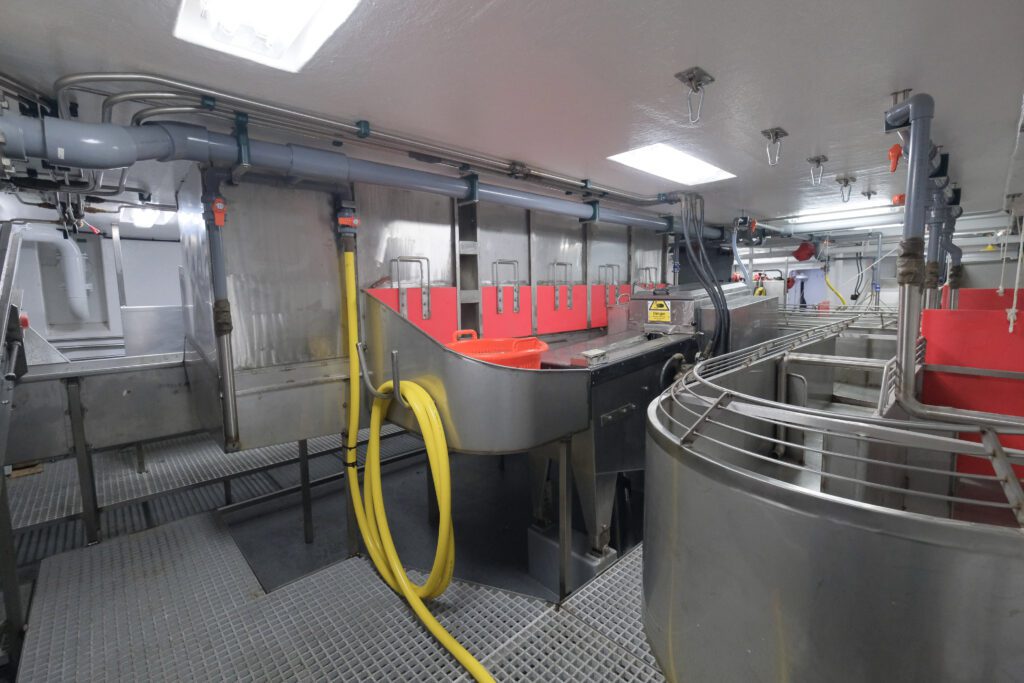 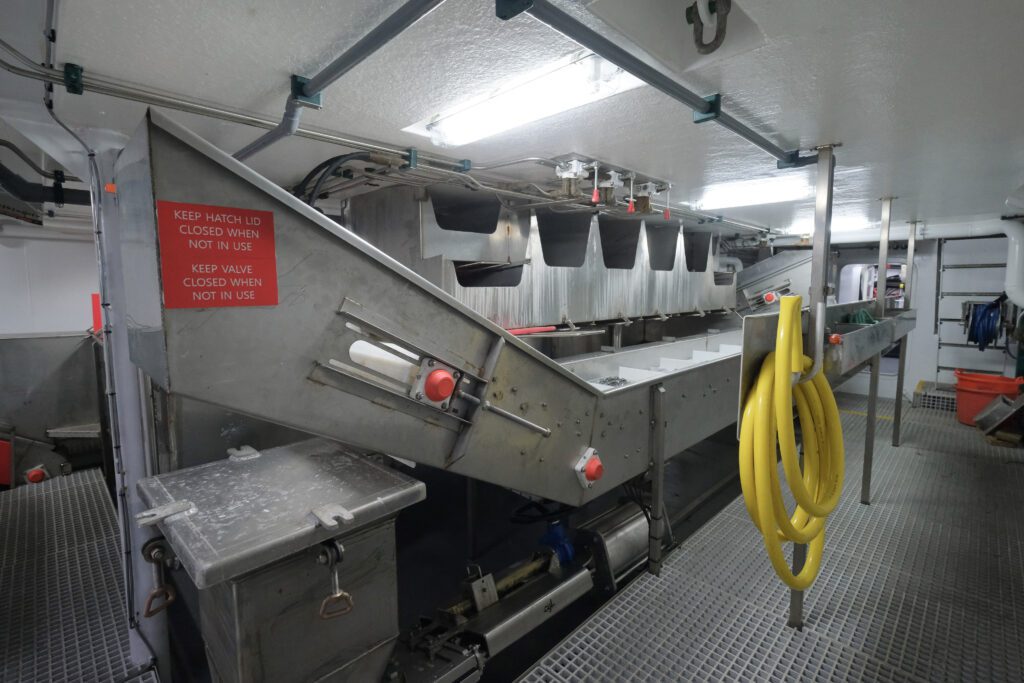 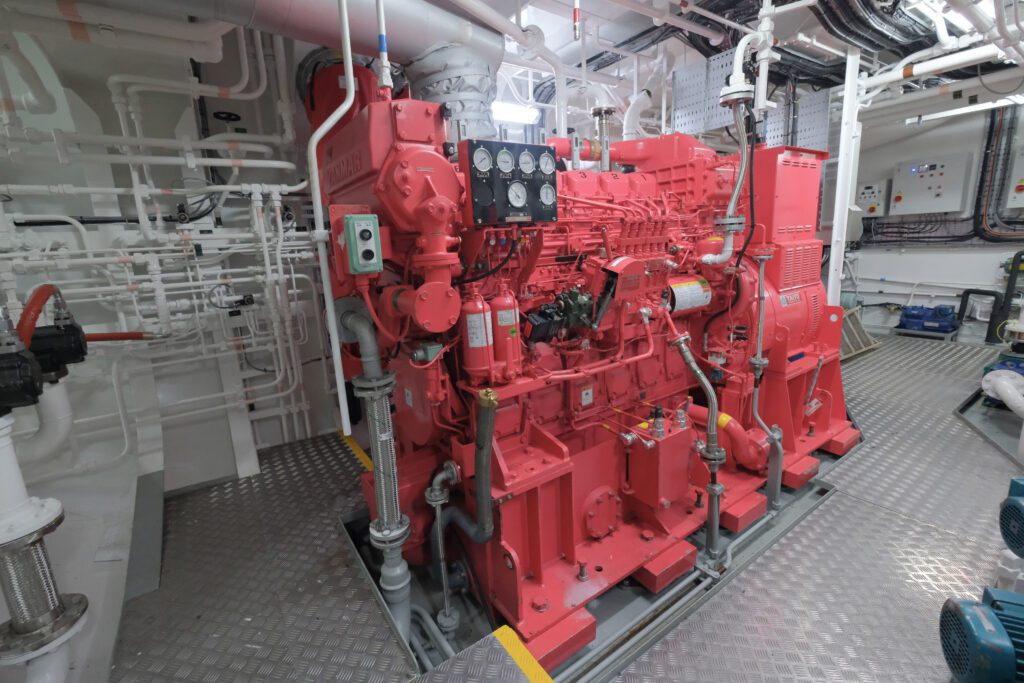 Macduff Ship Design are delighted to announce the completion and delivery of the, ‘VENTURE IV’, to Mark Lovie of the Venture II Fishing Company Limited.

The project began early in 2020 when the owner expressed an interest to build a new fishing vessel to replace the existing <24m registered vessel. Improving on the fuel efficiency, speed, sea keeping, and crew comfort. Based on their recent experience it was known that to meet these goals that a longer ship would likely be required, free from the constraints of registered length and gross tonnage. As well as increased length, it was decided that it would be advantageous to study the performance of various bow designs in relation to speed and sea keeping, to enable the hull to be optimised to its full potential. At this time we worked closely with Macduff Shipyards and the Wolfson unit at Southampton University. The Wolfson Unit suggested that a program of tank testing be carried out, comparing two hulls of similar overall length. The first featuring a conventional hull with bulbous bow and flared stem, and the second featuring a hybrid bow with an inverted bow for the majority of the stem but still retaining a small flared portion at the top to keep the fore deck dry. Following from this, two scale models were manufactured and then trialled in the Solent University Towing Tank at a range of different speeds, in both calm water and simulated waves representative of the areas which the owner operates. The results from the trial showed a decrease in hull resistance in calm water, mainly due to the increase in waterline length of the new bow. However, more notably the modern bow should a significant reduction in both resistance and motion when being towed into a head sea with waves, particular at higher speeds above 8 knots.

With the research complete the yard and Macduff Ship Design began on the design work, with the hull lines finalised, faired and stability assessed by Macduff Ship Design the construction plans were then drawn up and submitted to Bureau Veritas classification for approval along with the outfitting and engineering drawings. These were then supplied to Finomar Shipyard based in Szczecin, Poland who were sub-contracted to fabricate the hull and wheelhouse which upon completion was towed to Macduff in the late summer of 2021. The full outfitting was completed in Macduff to MCA and BV regulations with the vessel departing Macduff just over a year after arriving to go to Fraserburgh where it docked for a final paint. Sea and fishing trials were conducted in the Moray Firth before the vessel was signed over to the new owners just before Christmas 2022 with enough time for two short maiden trips, fishing off the west coast of Scotland. Early indications are that the hull is performing as anticipated with increased speed, reduced fuel consumption, and improved sea keeping evident.

The hull is of round bilge form with a streamlined inverted bow, flared upper stem, beam carried full length to the transom and possesses two complete decks, as well as a partial shelter and bridge deck above this. A ballast box keel is fitted along with deep ‘V’ bilge keels to dampen roll motion.

‘VENTURE IV’ features four deck levels which apart from the bridge deck all run the full length of the ship. The arrangement of the ship is based closely on the successful predecessors, ‘ENDEAVOUR IV’, ‘VENTURE III’, ‘ENDEAVOUR V’, which have proven themselves over the years. The longer vessel makes use of the additional space to increase crew comfort and working areas, with large generous cabins and mess areas provided along with a fish hold which can comfortably carry 2000 fish boxes without the need to stack high.

The aft peak features numerous tanks used to house both fresh water and ships services such a lubrication and hydraulic oil.

Forward of this the engine room houses the main propulsion machinery which is provided by a YANMAR 6EY26W engine rated at 1110 kW at 750 rpm coupled to a free-standing Mekanord 650HS gearbox with a reduction ratio of 5.44:1 which drives the large 3.3 m diameter controllable pitch propeller. A low drag high thrust nozzle is fitted in way of the propeller and incorporates a triple rudder system to provide high turning force. Two YANMAR 6NY16L generator sets are fitted within the engine room, each delivering 280 ekW of power. The main engine and generators are cooled via freshwater plate coolers. The hydraulic towing pumps along with stern thruster are also fitted withing the engine room along with the main electrical switchboard, refrigeration and the ships pumping systems.

A large fish room is fitted forward of the engine room with capacity for up to 2,000 stacking fish boxes. Refrigeration plant and chilling pipes for the fish hold was provided and fitted by Premier Refrigeration along with two 2.5 t Geneglace ice making machines, each feeding into large ice lockers which can house up to 10 t of flake ice.

At the stem of the vessel the fore peak is divided into four compartments with three large freshwater tanks which are used for ice making along with a bow thruster access compartment on the centreline where grey and black water tanks are situated.

Above the main deck the vessel is generally divided along the centreline with working areas to port and accommodation to starboard.  To the port side there is a steering gear compartment combined with engineer’s workshop aft, fish handling area amidships and dry locker forward. To the starboard side there is a laundry/pantry/galley aft, followed by a large mess/lounge amidships and four two-man cabins forward. A large 20 m3 hopper is fitted on the centreline.

A deck up features the trawl deck where most of the deck machinery is fitted, and fishing takes place. The deck features twin ramps aft with hydraulic stern gates fitted to the top of each ramp for crew protection. Forward of these are two flush mounted hopper hatches where the catch is taken onboard. The deck is then open all the way to the stem where three split sweep winches are fitted to allow maximum deck length for storing and mending nets. Fitted amidships immediately above the net tracks are three separate bagging winches. Three split winches are fitted amidships, two to starboard and the third to port and lead directly aft to large trawl blocks which are capable of sliding forward up to 1.2m from the transom to reduce the pressure on the steering gear when towing an edge in deep water. Numerous casings are fitted either side of the tracks and serve various functions such as a gear store, air handling unit room, two-man cabin and unloading trunk.

The shelter deck runs from stern to stem. Aft it is mainly open and provides a walkway around the perimeter of the vessel as well as shelter for those working on the trawl deck. Amidships features a full breadth casing where a skipper’s cabin with en-suite is fitted, along with two two-man cabins, a general WC and electronics room. Forward is arranged for mooring and anchoring and features a three-barrel winch fitted within a weathertight compartment which is used to stow the two anchor warps along with a spare barrel for mooring rope.

At bridge deck level a large wheelhouse is situated which is nearly the full breadth of the vessel to provide great visibility when manoeuvring in restricted areas. Large windows are fitted all around for good visibility with full height windows fitted aft on the centreline, providing a commanding view of the trawl deck to enhance crew safety.

The extensive deck machinery package was supplied by MacGregor who also designed the hydraulic system. The packages comprises of: 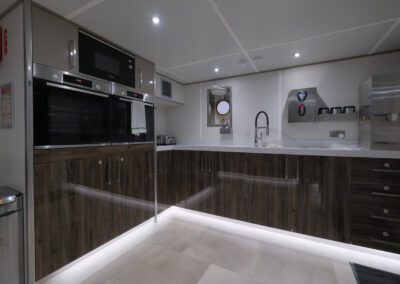 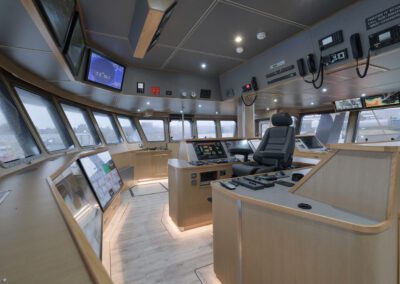 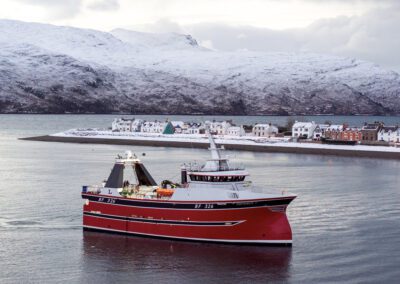 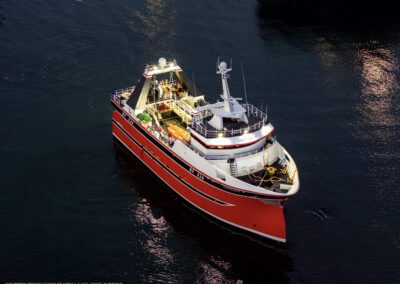